A Fraud and Disgrace

United States immigration courts today are a fraud and disgrace, by design. They are intended to keep refugees trapped on the border — not to give them access to justice or a fair hearing.

United States immigration courts today are a fraud and disgrace, by design. They are intended to keep refugees trapped on the border — not to give them access to justice or a fair hearing.

This timely chart of “Asylum Acceptance Rates in U.S. Immigration Courts FY 2014-2019,” from Syracuse University, says it all. 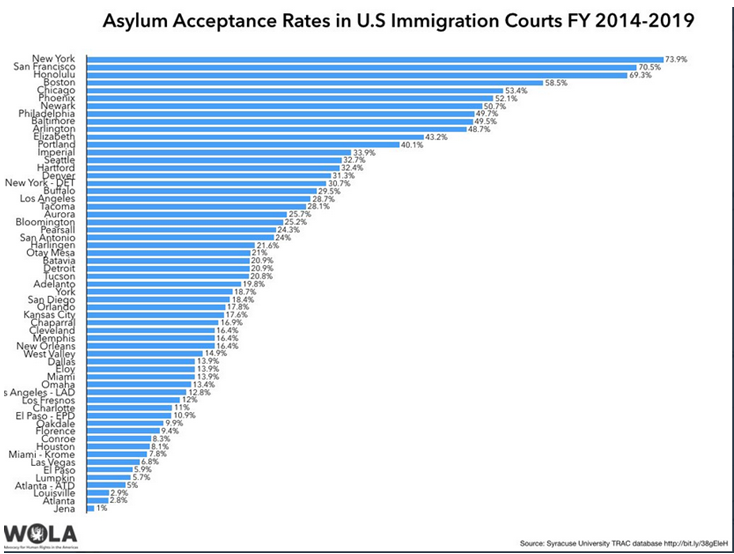 How else to explain that 74% of people who applied for political asylum in New York were accepted, and 71% of the people in San Francisco and 59% in Boston — yet their fellow immigrants who went to court in Jena, Arkansas, were granted asylum 1% of the time?

The chart comes from the Transactional Records Access Clearinghouse (TRAC) at Syracuse University in New York, a wonderful organization that’s packed a lot of information into a small space here.

The rejection rates of the seven judges at Los Fresnos, the enormous “processing center” on the Texas Gulf Coast, ranged from 95.2% down to the two most generous judges there, who tied at 82.3% rejection rates.

Yet in Chicago in those years, immigration judges granted asylum 53.4% of the time.

If you run your eyes down the chart’s list of cities, from most generous judges to the least, your eye will move from north to south.

Starting from the bottom — the stingiest courts — you have to move up 24 places to Cleveland (83.6% rejection rate) to find the first court above the Mason-Dixon Line.

Why is it that the 21 judges in the Arlington, Va. immigration courts have approval rates ranging from 8.7% to 85.2%, according to TRAC? Same sorts of cases, same place.

Why do approval rates from Atlanta’s seven immigration judges range from 0% to 8%, while Honolulu’s two judges grant asylum 65.1% and 76.4% of the time? Could it be that judges in Honolulu are more familiar, and comfortable with, people of other races than the judges in Atlanta?

And why is it that the stingiest of 39 immigration judges in New York granted asylum 14.8% of the time, and the most-generous judge 65.9% — infinitely more than the schlub with a 0% rate in Atlanta?

It’s because U.S. immigration courts are not designed to be fair. They’re designed, these days, to be lethal.

I worked as a paralegal in U.S. immigration prisons in the 1980s during the Reagan administration’s assault upon refugees that that administration itself was creating. It was well-known that the most essential task to save refugees’ lives was to get them away from the border.

In those days, a crucial element in each refugee’s path into or out of the United States was the bond hearing. Today they don’t even get bond hearings.

I have seen a refugee pay his bond, and a prison official raise it on the spot, and refuse to release him.

And I saw the nun who was trying to bail out this particular refugee crinkle her nose at him.

Yes, I’m sorry to say, Sister Suzanne: You crinkled your nose at the assistant district director of deportation.

Sister Suzanne, a tough nun — and all the nuns I’ve met were tough — stayed up late for two weeks writing letters to her fellow nuns, describing conditions at the Oakdale, Louisiana immigration prison, and her fellow sisters sent thousands of dollars to bond refugees out.

One of the fondest memories of my life was the night I put the kids to bed, then returned to the Oakdale Legal Services office, to find Sister Suzanne typing those fund-raising appeals late at night, some kinda crazy music blaring.

She shook her head. “Stevie Wondah. He badder than Michael.”

Sister Suzanne: Where are you now?