A Tucson ordinance allowing the city to confiscate and destroy firearms violates state law, attorneys for the state argued before the Arizona Supreme Court on Tuesday morning. 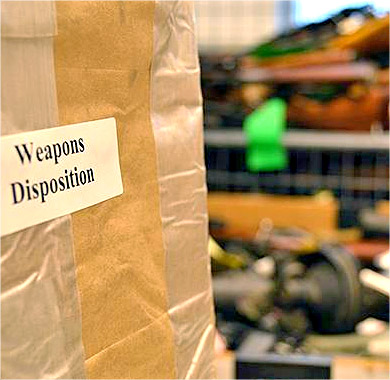 PHOENIX (CN) – A Tucson ordinance allowing the city to confiscate and destroy firearms violates state law, attorneys for the state argued before the Arizona Supreme Court on Tuesday morning.

The city and the state have been at odds since Dec. 6, when Arizona Attorney General Mark Brnovich asked the state Supreme Court to declare the ordinance invalid. That same day, the Tucson City Council voted unanimously to challenge Senate Bill 1487, a law enacted in 2016 that allows the state to withhold funding for cities that act contrary to state law.

Deputy Attorney General Paul Watkins told the state Supreme Court that the ordinance violates the state's ability to regulate property that has been forfeited.

Chief Justice Scott Bales raised some concern with Brnovich withholding Tucson's funding if the court does find its ordinance is contrary to state law.

"Why would we need to take that extreme of a measure in terms of relief?" Boles asked. "If the local government basically gives up and says state law prevails, doesn't that resolve the issue in itself?"

That concern extended throughout the bench.

"Why would we be told here that we should instruct the city to post a bond?" Justice Clint Bolick asked.

"I'm not sure how the bond relates to the overall scheme," Watkins said.

"When the police powers are involved, the matter is of statewide concern," Watkins said. "This is an inherent aspect of state sovereignty, the ability to obtain property through those means are a law enforcement authority related to police powers."

Arizona law allows for the resale of confiscated firearms, but not their disposal. The city has seized more than 6,000 guns under the 2005 ordinance.

Richard Rollman, an attorney for Tucson, was adamant to the court that the confiscation and destruction of guns is a local matter.

"The city does acquire some guns through forfeiture," Rollman said. "The city charter also has provisions that govern unclaimed property. If property is found within the city, it is a local matter."

Bales questioned how a city can identify what constitutes an issue as purely municipal.

"Once it is property, it is personal property," Rollman said. He did ask the court for additional guidance in differentiating when the city charter trumps state law.

The court did not indicate when it would issue a ruling.