Jurors began deliberations Monday afternoon in the second obstruction trial of former Sheriff Lee Baca, whom prosecutors say conspired with his underlings to thwart an investigation into inmate abuse at two jails. 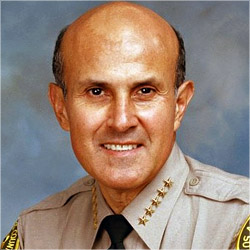 After U.S District Judge Percy Anderson had instructed them, the 12 members of the jury ended deliberations at around 3:30 p.m. Monday. They will return to court Tuesday to decide the fate of the retired 74-year-old lawman, whose attorney in closing arguments tried to persuade them the government lacked concrete evidence to convict him beyond a reasonable doubt.

“They’ve basically taken a bunch of evidence, like spaghetti, and thrown it against the wall,” attorney Nathan Hochman said.

A guilty verdict will cap a remarkable turnaround for the government, which has scored convictions against the other main players in the conspiracy but last year struggled to convince jurors in the first trial of Baca’s guilt. Just before Christmas, all but one juror voted to acquit.

After that setback, Judge Anderson ordered another trial on charges of obstruction of justice and conspiracy to obstruct justice. Prosecutors added a count of making a false statement, a charge they first planned to try separately.

The government says Baca interfered with a federal investigation in the summer of 2011, when the Los Angeles County Sheriff’s Department discovered the FBI was running a covert operation in the jails. Deputy Gilbert Michel took a bribe to smuggle a cellphone to inmate Anthony Brown, which officials later found hidden in a Doritos bag among Brown’s belongings.

Prosecutors say Baca lied to them at an April 2013 meeting, denying knowledge of the conspiracy – including the threatened arrest of FBI Agent Leah Marx by Internal Criminal Investigations Bureau deputies Scott Craig and Maricela Long.

Dressed in a gray pinstriped suit, white shirt and a rose gold tie, Baca watched from his counsel’s table as Rhodes said Baca had orchestrated the scheme “like a chess match” by placing convicted Undersheriff Paul Tanaka in charge of obstructing the FBI.

Baca maintains he only wanted to get to the bottom of the FBI investigation and was forced to take precautionary measures after the cellphone entered the jail system. He says he also wanted to protect Brown, whose life would be in danger if other inmates realized he was an informant.

But Rhodes dismissed Baca’s concerns about the cellphone, which can be used to orchestrate drug deals or murders, as a “made-up story for trial.”

“This case is not about a cellphone and it’s not about Anthony Brown,” Rhodes said.

Meanwhile, Hochman told jurors his client never wanted to halt the FBI's probe. Instead, he said Baca only wanted to work with an agency that had previously partnered with his department. The government had brought in evidence of jailhouse brutality to “poison” their view of Baca, he said.

Telephone and email records do little to show the sheriff’s involvement in the conspiracy, Hochman said.

“This isn’t chess. It’s not even checkers,” Hochman said, adding that Tanaka had the “agenda" to obstruct, not Baca.

“[Baca] welcomed the FBI and wanted to join the investigation, not thwart it,” the defense attorney said.

During rebuttal, prosecutor Brandon Fox accused Hochman of distorting facts, misleading jurors and making “stuff up.” He likened Baca to a king in a chess game, with his underlings acting as rooks, bishops and pawns.

“They do the dirty work for the king,” Fox said, holding up a chess piece to make his point.

Baca faces up to 20 years in federal prison if convicted of conspiring to obstruct an FBI investigation of jailhouse abuses and lying to prosecutors.

During the trial, Sheriff’s Capt. William “Tom” Carey said that Baca was present when officials made plans to hide Brown in the jail system by changing his name and booking number. He was also kept in the loop when Internal Criminal Investigations Bureau deputies Scott Craig and Maricela Long approached Marx outside her home and threatened her arrest – an interaction immortalized on department video and played to jurors Monday.

“He was OK with it,” Carey said. “He didn’t tell us not to do it. His advice to us was just not to put handcuffs on her.”

Baca told prosecutors at the April 2013 meeting that he did not know about the approach until after the fact. But Carey told the court that Baca “absolutely” knew about it.