The Climate Leadership Council’s proposal to charge electricity providers, oil and gas drillers, refiners and chemical plant operators a starting $40 per ton fee, or tax, on carbon emissions would hit Americans in the pocketbook, raising gasoline prices by 36 cents per gallon, according to its founder Ted Halstead.

Electric bills also would go up. Driving habits would change, especially for residents of Hawaii and California, where gas prices are already over $3.50 per gallon.

But under the council’s plan, all the taxes would be returned to the public as quarterly dividends. Halstead says a family of four would get $2,000 a year and the dividend would grow as the fee increases by 5% per year.

“According to the U.S. Treasury, 70% of American families — including the most vulnerable — would come out ahead, receiving more in carbon dividends than they pay in increased energy costs,” Halstead wrote in a Wall Street Journal op-ed in September 2019.

Halstead says the Republican-conceived plan shows how a “climate solution” can be based on the bedrock conservative principles of a free market and limited government.

To make the tax acceptable to industry, the council’s plan calls for “streamlining of regulations that are no longer necessary.”

Among several competing U.S. carbon tax proposals, it has gained the most traction, thanks to the millions of dollars pouring into its public relations campaign from its roster of Fortune 500 founders, including IBM, Microsoft, Johnson & Johnson, PepsiCo, AT&T, Ford Motor Co., BP, Shell and Chevron.

Experts say oil companies are pining for stability in the face of impending climate legislation, and the sooner they have a carbon tax baked into their costs the better to guide their mineral lease investments.

Smaller drilling firms are laying off workers as they struggle to stay afloat with oil prices below $60 per barrel, and a carbon tax would cut into their profit margins.

“Introducing a bill in Congress is our top priority for 2020,” he said in an email.

He said despite the conventional wisdom that climate legislation is a nonstarter with Republicans in Congress, Republican lawmakers are growing concerned the party is turning off young voters by not addressing climate change.

The council’s plan is backed by Young Conservatives for Carbon Dividends, a group of Republican college students, and more than 3,500 economists.

University of Houston energy economics professor Ed Hirs is not one of them.

“I think it’s simply a naïve talking point that in practice would not work,” he said.

Because Louisiana and Texas are centers of the oil and gas industry, the states would bear a disproportionate amount of the taxes, Hirs said, and “naturally there will be layoffs” as refiners reconfigure or reduce their operations.

Hirs sees the proposed dividend in the Climate Leadership Council’s plan as a ploy to win votes for Republicans.

“Congratulations, Joe Refinery Worker, you just lost your job but you’re going to get this little dividend here. … If I told you I was going to give you $1,500 you might vote for me. But if you knew it was going to put your neighborhood out of business, you might think twice,” he said.

Hirs said it’s unrealistic to think Congress would let all the money from such a tax go back to the public. “I would like to see it reinvested in either paying down the budget deficit or promoting cleaner fuel technologies and cleaner transportation technologies,” he said.

“On the Gulf Coast right now there is a serious need for investment in resiliency programs dealing with sea-level rise, with the impacts of larger coastal storms,” he said.

Shelley acknowledges the hundreds of thousands of Texans employed in the oil and gas industry would be hit hard by carbon taxes and a transition away from fossil fuels, but he said the taxes could be used for training a skilled workforce for careers in wind and solar energy.

Shelley is also upbeat about the growing bipartisan support in Congress for carbon taxes, notably in the Climate Solutions Caucus, which has eight members in the Senate, four of whom are Republicans, and 65 members in the House of Representatives, including 24 Republicans.

Robert Jones is a retired power plant engineer and one of more than 173,000 members of the Citizens Climate Lobby. With chapters across the United States, the group regularly meets with lawmakers to push for carbon tax legislation. It has thrown its support behind the Energy Innovation and Carbon Dividend Act of 2019.

The bill, introduced by U.S. Rep. Ted Deutch, D-Florida, would return all carbon tax revenue to taxpayers in monthly dividends. The tax would start at $15 per ton and increase by $10 per year.

To encourage other countries to adopt parallel taxes, both Deutch’s bill and the Climate Leadership Council’s plan would impose the carbon tax on crude oil imports, with the idea that the importing countries would rather keep the revenue for themselves than pay tariffs to the United States. 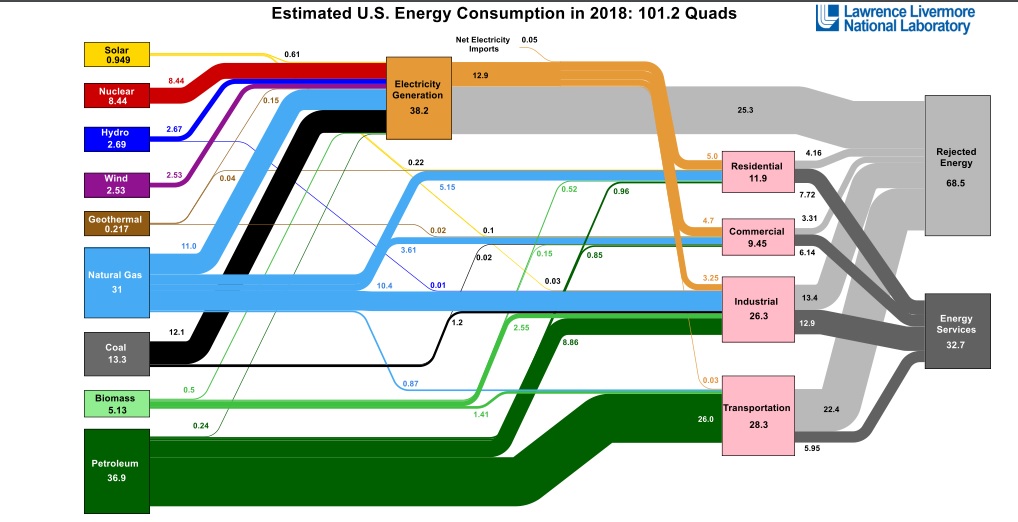 On an unseasonably warm afternoon last November, Jones pored over charts and gave a history lesson on U.S. energy use to a reporter at a table outside a suburban Houston coffee shop.

He said Americans get 37% of the fuel for their cars and homes from petroleum, 31% from natural gas, 13% from coal and 8% from nuclear sources.

Jones said renewable sources, including hydroelectric power from dams and biomass energy from burning wood chips and shavings, account for 10% of the U.S. energy mix.

Jones believes power companies, faced with a carbon tax, will innovate ways to make their plants more efficient to save money.

“In most power plants, whether it’s coal or nuclear, you’re heating up water to make steam to put in a turbine that rotates and turns a generator,” he said.

“Now of all of that heat, only 33% of it is actually used. The rest of it has to be condensed and is wasted. It goes into the ocean or into the rivers or up into the air. … Now, 100 years ago, the efficiency was only 10%. So we are getting better,” he said.

“We want the dividend to be significant enough in people’s pocket that it makes it very difficult for this to be repealed, overturned, or diverted to something else,” he said. “Once people start getting a significant dividend after a few years, we think it’s going to be much more bulletproof.”

The drumbeat is growing. Hirs, the economics professor, said, “What everybody knows is coming is there is going to be some sort of cost associated with carbon.”