The federal government was hit with a second lawsuit this week claiming its bungled management of waterways allowed a deadly parasite to infect 91 percent of endangered juvenile coho salmon on the California-Oregon border. 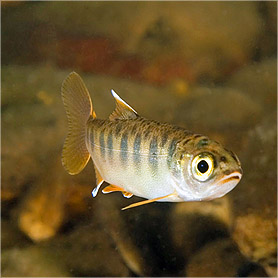 SAN FRANCISCO (CN) – The federal government was hit with a second lawsuit this week claiming its bungled management of waterways allowed a deadly parasite to infect 91 percent of endangered juvenile coho salmon on the California-Oregon border.

The lawsuit from the 5,000-member Yurok Tribe comes four months after the 2,700-member Hoopa Valley Tribe in Humboldt County blamed the feds for causing lethal infections in threatened Chinook salmon.

The infections are blamed on low-flow conditions in the Klamath River and its streams. The water levels are controlled by the U.S. Bureau of Reclamation, which oversees the Klamath Irrigation Project in Southern Oregon and Northern California.

The tribe says those high infection rates should have triggered the requirement for the Bureau to review the project's impact on an endangered species, but the government has refused to take that step.

After the Yurok, Karuk and Hoopa Valley Tribes, along with a coalition of fishermen and conservation groups, threatened to sue, the co-defendant Bureau of Reclamation formed a technical advisory team in July to recommend steps for reducing C. shasta infection rates.

On Nov. 9, the team created a guidance document urging the Bureau to provide regular flush flows at certain times of the year to flush out worms that host the parasites. The document also recommends reserving 50,000 acre-feet of water for emergency spring dilution and disruption flows each spring when certain conditions, such as high water temperatures and disease rates, require urgent action.

On Nov. 28, the technical staff and federal agencies commented on the guidance document, “largely agreeing with the need for additional flows to flush out polychaetes [host worms] and an emergency dilution flow regime,” according to the complaint.

But the Bureau did not commit to any mitigation measures, the tribe says, which violates the Endangered Species Act. They say failure to reinitiate formal consultation on the project's impact on coho salmon also violates the Administrative Procedure Act and Magnuson-Stevens Fishery Conservation Act.

Finally, they say, the National Marine Fisheries Service 2013 biological opinion that authorized the project was arbitrary and capricious in violation of the Administrative Procedure Act.

The Yurok seek an injunction compelling the Bureau to relaunch the formal consultation process and stop limiting disease-management flows and other operations "reasonably certain to take juvenile coho salmon."

It also seeks an order invalidating provisions of the 2013 biological opinion.

Co-plaintiffs include the Pacific Coast Federation of Fishermen's Associations, the Institute for Fisheries Resources and Klamath Riverkeeper.

They are represented by Kristen Boyles with Earthjustice in Seattle.