Vaccine Trust Is Up, Pew Finds, Along With Attitudes on Masks

(CN) — As a vaccine for Covid-19 edges closer, 60% of Americans say they will take it when it becomes available but a full 21% say they will not, the Pew Research Center reported Thursday.

When Pew last polled Americans on the topic in September, only 51% said they would get the vaccine. Meanwhile a Gallup poll from August found that 35% of Americans were not planning to get the vaccine even if it was free and approved by the Food and Drug Administration.

In the new survey, 52% of those not planning to get the vaccine say they are not too concerned about the possibility of contracting Covid-19 and requiring hospitalization. For those who were “very concerned,” 74% rated their vaccination plans as probable or definite.

Among Black Americans, 71% said they know someone who has been hospitalized or died, and just 42% said they will get a vaccine.

Confidence is up for not only getting the vaccine but also that the U.S. will be able to produce a safe and effective vaccine, with 75% saying they have a “great deal” of confidence in the process. That is up from 65% in the September study. 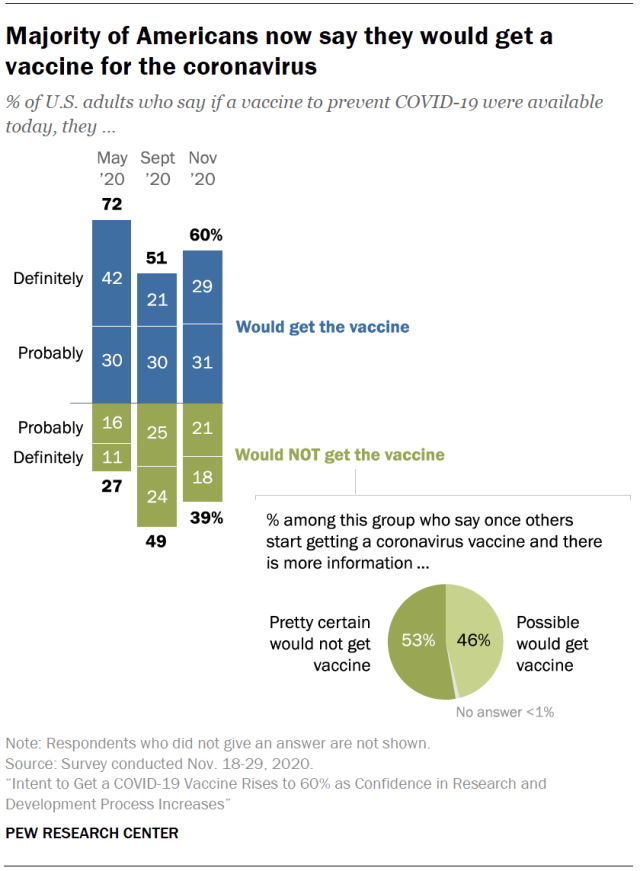 Though more Americans feel confident that the vaccine will be safe, only 37% say they are comfortable being among the first to get it.

Paulo Verardi, an associate professor of virology and vaccinology at the University of Connecticut, called the study promising as it will be important for a large sector of the population to get the vaccine.

“To attain herd immunity, it’s expected that at least two-thirds of the population, if not more, would need to be immune against Covid-19,” Verardi said in an email. “The fact that 60% of Americans now say that they would get a Covid-19 vaccine is very encouraging, and I predict that this number will be even higher as vaccines start being distributed and administered. If enough people don’t get vaccinated, the virus and its negative consequences for all of us, will linger.”

As coronavirus cases surge across the country, the study revealed that 71% of Americans feel the worst is yet to come. Further, about half say that they fear their local hospitals will not be able to handle it.

A full 49% of Americans said they were very bothered about being around people not wearing masks in public, and 72% said they are not bothered by mask requirements in stores and businesses.

Notably, 87% say they wear a mask most of the time in stores or businesses, which is up from 65% from a June Pew study.

Trump’s overall approval rating for his handling of the virus is 35%, according to the study, down from 48% in a March Pew study.

The United Kingdom authorized the Pfizer-BioNtech vaccine for emergency use on Wednesday. The U.S. is still waiting for the Food and Drug Administration to finish its review process prior to approval.