Judge Sheila Abdus-Salaam, the first black woman to sit on New York’s highest court, fought for the disenfranchised in her trailblazing career before being found dead in the Hudson River on Wednesday afternoon. 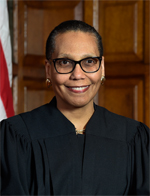 She was 65 years old, recently remarried, and earned a reputation as a path-breaking voice for the disenfranchised on New York’s Court of Appeals.

"Justice Sheila Abdus-Salaam was a trailblazing jurist whose life in public service was in pursuit of a more fair and more just New York for all,” said Gov. Andrew Cuomo, who appointed her to the bench in 2013.

“Through her writings, her wisdom, and her unshakable moral compass, she was a force for good whose legacy will be felt for years to come,” he added.

Quoting anonymous law enforcement sources, the New York Times said police found no signs of trauma to her body, and suspected that the judge’s death had been a suicide. The New York City Police Department confirmed that the investigation continues.

At a swearing-in ceremony for new recruits Thursday at the Police Academy in Queens, the NYPD's Chief of Detectives Robert Boyce told reporters that an autopsy was “proceeding right now as we speak.”

During an external examination, Abdus-Salaam did not show any signs of physical abnormality, and did not appear to be in the water a long time, according to the detective.

Boyce emphasized that police did not believe the judge had taken any drugs, including anti-depressants, and he declined to speculate on any cause of death.

“It’s too early to tell right now,” the chief detective emphasized. “We’re speaking to people in her family. So, I don’t want to go too far into that, but right now, we have a lot of questions we have to ask.”

The New York City's Medical Examiner's Office's spokeswoman Julie Bolcer said that Thursday's examination has concluded, and further studies will be needed to determine the cause of death.

But the Court of Appeals spokesman said that these reports are incorrect, based on false assumptions about her religion because of her last name.

More than her accomplishments, the court’s Chief Judge Janet DiFiore remembered Abdus-Salaam in a statement as a “most beloved colleague.”

“Her personal warmth, uncompromising sense of fairness, and bright legal mind were an inspiration to all of us who had the good fortune to know her,” DiFiore wrote. “Sheila's smile could light up the darkest room. The people of New York can be grateful for her distinguished public service. Our thoughts and prayers are with her family, and we will miss her greatly.”

From her earliest days on the court, Judge Abdus-Salaam had been known for protecting the vulnerable.

When an indebted 80-year-old widow found herself in danger of losing her rent-stabilized apartment, Abdus-Salaam ordered the creditors to stand down in a ruling that proved to be a boon to tenants statewide.

“Affordable housing is an essential need,” Abdus-Salaam wrote in 2014, a little more than a year after her appointment.

In August 2016, she handed a victory to same-sex parents in a ruling favoring the non-biological parent of two lesbian couples.

For 25 years, New York law and precedent excluded the partners of an unmarried couple without a biological link to a child from the definition of a parent.

Finding this rule outdated and discriminatory, Abdus-Salaam observed that “a growing body of social science reveals the trauma children suffer as a result of separation from a primary attachment figure — such as a de facto parent — regardless of that figure’s biological or adoptive ties to the children.”

A Harlem resident, Abdus-Salaam opened up about discovering her family’s ties to slavery in Virginia, in a video interview with the local nonprofit Project Brownstone.

“So all the way from Arrington, Va., where my family was the property of someone else to my sitting on the highest court of the state of New York is amazing and huge, and it tells you and me what it is to know who we are and what we can do,” she said in the video.

The Court of Appeals heard 17 cases in March, only one of which has been decided.

Abdus-Salaam is survived by her husband of eight months.