The good, the bad and the cringe: Pew says teens view social media as a neutral

The study found surprisingly nuanced views about platforms that on the one hand brought so much connection during the pandemic and on the other tends to amplify concerns about body image and fitting in.

(CN) — Standing up to the barrage of trend pieces about what apps like Instagram are doing to childhood in the 21st century, the Pew Research Center released a report Wednesday with insights from the teens themselves about their social media usage.

Pew conducted the survey this spring, collecting input from 1,316 teenagers across the United States. While more than 59% reported that using social sites hasn’t affected them either for better or worse, 32% said it has had a positive effect, and 9% said it has had a negative effect.

The responses showed that teens appear to appreciate both the good and the bad from their social media intake. For example, 80% of teenagers reported that the platforms help them feel more connected, but they also told Pew in significant numbers about social media's deleterious effects, including the pressure to get "likes" or how one person's post can make others feel excluded.

One teen noted that while he feels awkward making friends in person, he has online friends he talks with “practically daily.” Another noted that the apps served as lifelines during the pandemic — for both connection and entertainment. “I’ve liked, especially during the pandemic, being able to communicate with my friends more, since I couldn’t see them in person. And then also, having something to watch to entertain me, which was good, because we were just stuck at home,” the teen girl wrote.

Another positive that some teens pointed to in the survey was that the platforms make it easier to feel connected to diverse groups of people, whether that person is halfway around the world or just someone in their community with a differing outlook.

As for the negatives, teenagers expressed how they can feel overwhelmed or left out just by seeing others’ interactions and posts on the platforms. Pew said 23% of the teens reported times when they were left feeling badly about themselves after using social media.

“Some 45% of girls say they feel overwhelmed because of all the drama on social media, compared with 32% of boys,” the 62-page Pew report notes. “Girls are also more likely than boys to say social media has made them feel like their friends are leaving them out of things (37% vs. 24%) or feel worse about their own lives (28% vs. 18%).” 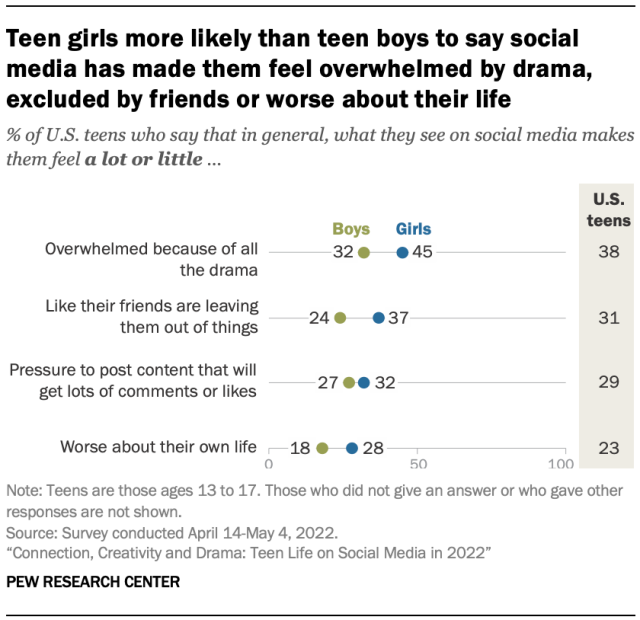 One teen girl mentioned her feelings of exclusion and sadness after seeing her friends' feeds. “They all hung out without me and were posting on social media,” she wrote.

Another negative discussed in the report is that the curation of social media feeds puts more pressure on teens to “be social-media perfect.”

“They live outside the real world and live more in social media,” one girl wrote of her peers. “Is this [moment in my life] social media-worthy? Everything is gauged with that. So, that’s something I feel, people are no longer as real as they’re supposed to be.”

Interestingly, the study noted that teenagers tended to be more critical of how social media has influenced their friends than themselves.

“While 9% of teens think social media has had a mostly negative effect on them personally, that share rises to 32% when the same question is framed about people their age,” the report notes.

The research also shed light on the fact that when it comes to teens engaging in politics and social activism online, there are partisan differences.

“Teens who identify as Democrats or who lean toward the Democratic Party are twice as likely as teens who are Republicans or GOP leaners to have engaged in any of these activities in the past 12 months (20% vs. 10%),” the study states.

When asked how they’d react if social media disappeared, participants had a range of responses. Some said they’d be relieved not to spend so much time in a “toxic” place. Others were concerned about boredom.

“I think it would be a little bit [messed up if social media disappeared],” one teen boy wrote. “I spend 99% of my time indoors in front of my computer, if I’m not playing games, I’m watching pirated videos. If I’m not watching videos, maybe I’m reading an article. I’m always online.”

A teen girl had a different take.

“[When] we were younger, [social media] didn’t have an effect on us and social media wasn’t as big as it is now,” she said. “I feel like we were more free and more happy, and no stress or overthinking or insecure.”