Growing emissions from the U.S. oil and gas and petrochemical sectors could hinder some of the climate benefits from the nation’s fracking boom and transition away from coal in favor of natural gas, an environmental group said in a report released Wednesday.

(CN) – Growing emissions from the U.S. oil and gas and petrochemical sectors could hinder some of the climate benefits from the nation’s fracking boom and transition away from coal in favor of natural gas, an environmental group said in a report released Wednesday.

The decline of the U.S. coal industry since the late 2000s – and an associated drop in pollution from the power sector – can largely be attributed to the glut of cheap natural gas unleashed by fracking, and electric utilities have increasingly ditched coal as their fuel of choice in favor of cleaner-burning natural gas.

But Wednesday’s report from the Washington, D.C.-based nonprofit Environmental Integrity Project warned that the progress may be undermined by an expected growth in greenhouse gas emissions from natural gas production and new oil refineries, petrochemical plants and other related facilities in the years ahead.

“Oil and gas production and petrochemical manufacturing are responsible for most of the growth in greenhouse gas emissions today,” Eric Schaeffer, the environmental group’s executive director, said in a statement. “Unfortunately, the permits being issued by states and EPA for the largest projects do not include cost-effective methods for controlling greenhouse gas pollution, even though this is required by the federal Clean Air Act. Unless you think global warming is a hoax, that needs to change.”

Data from the Environmental Protection Agency show greenhouse gas emissions from U.S. power plants fell about 322 million tons over a five-year period from 2012 to 2017.

By contrast, the environmental group’s report estimated that emissions from new or expanded oil and gas-related projects, along with increasing natural gas production, could grow by about 227 million tons over the next five years.

“So that pretty much erases a lot of the progress since 2012,” Courtney Bernhardt, the group’s research director and lead author on the report, said.

“That’s a considerable amount of emissions and something that often goes overlooked when folks talk about our progress toward meeting climate change goals,” she added. 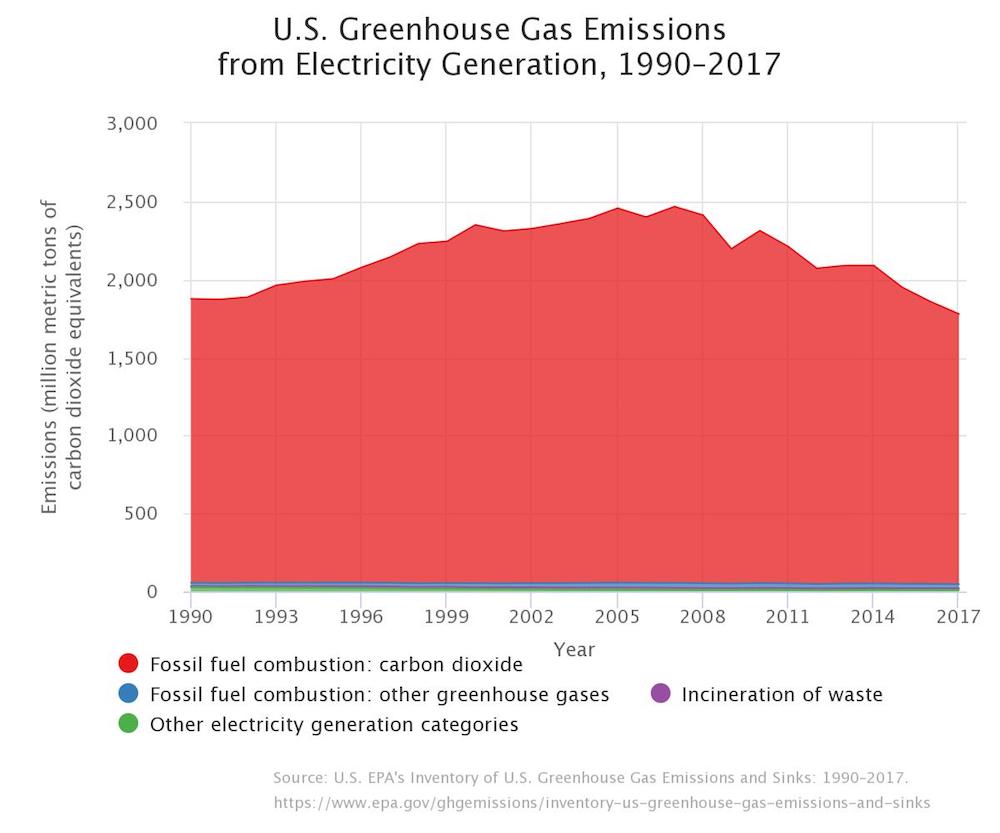 The future emissions estimates in the report were based on an analysis of data from state and federal air permits or permit applications for 157 industrial new or expanded facilities, about half of which are planned for Texas and Louisiana, along with federal projections on future natural gas production.

The report echoes concerns from other critics who have questioned natural gas’ role as a “transition fuel” while renewable energy sources are further developed. Much of the recent criticism has centered on record-high rates of energy companies burning off excess gas into the air, a process known as “flaring.”

Still, the fossil fuel industry has adamantly defended natural gas, touting its reliability, contributions to the national economy and its continued role in displacing coal.

An industry-led analysis from December showed flaring rates in the Permian Basin of West Texas, the nation’s largest oilfield, paled in comparison to oil producing regions in other countries. The report also highlighted significant reductions in methane emissions “intensity,” or the amount of emissions emitted compared to the amount of oil and gas produced.

“Our producers are proving every day that energy production and environmental stewardship are not mutually exclusive, and we are committed to sustainable energy policies,” Ben Shepperd, president of the Permian Basin Petroleum Association, said in a statement accompanying the December report.

Some oil giants have even broken ranks with the Trump administration on the methane issue, calling for continued federal regulation of methane and pledging to voluntarily cut their own emissions.

The Environmental Integrity Project insisted in Wednesday’s report that voluntary efforts alone would not be enough to curb future emissions. The group called for stricter air permits for oil and gas and petrochemical projects, along with better pollution monitoring and enforcement from the state and federal government.

“The U.S. is already struggling to meet climate commitments and transition to a low-carbon future,” the report stated. “The industries responsible for driving fossil fuel extraction and production need to be held more fully accountable for their actions and the consequences of those actions.”