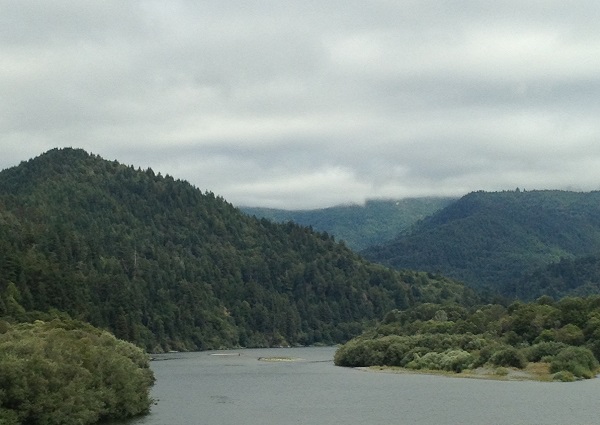 "The project water diversions have reduced flows and increased water temperatures in various parts of the Eel River, in addition to altering important environmental cues that, for example, tell fish when to spawn or begin their outmigration," the 12-page complaint states.

The groups claim the project also creates conditions that are beneficial to the predatory Sacramento pike minnow, which further threatens the endangered fish.

Earlier this year, PG&E filed its intent to renew its Federal Energy Regulatory Commission license to run the 109-year-old irrigation and hydropower system. Its existing license expires in April 2022.

The Potter Valley Project includes a 9.2-megawatt hydropower plant and mile-long water tunnel drilled through bedrock. It also includes Scott Dam at Lake Pillsbury and Cape Horn Dam, where the Eel River meets the east branch of the Russian River.

Critics including Scott Greacen, conservation director for Friends of the Eel River, which is not a party to the lawsuit, say the project should be shut down.

"The problem is we have a dam that's completely blocked this passage for the last century," Greacen said, referring to Scott Dam obstructing steelhead from part of the watershed that once served as a critical spawning habitat.

Proponents of the project, including the Potter Valley Irrigation District, say its contribution of about 70,000 acre-feet of water for local farms each year is "immeasurable" and has improved the quality of life for more than half a million residents of nearby communities.

The conservation director said his group is working with PG&E, local farmers, and other interested parties on the five-year license renewal process for the project. He said he's optimistic they can work out a deal that would lead to the decommissioning of the entire project, or at least the shutting down of one or two dams.

But Friday’s lawsuit claims the "reasonably prudent alternative" plan through which PG&E's manages the project pursuant to a 2008 biological opinion by the National Marine Fisheries Service must be re-evaluated if the plan "is not providing the anticipated benefits to salmonids."

California River Watch and Coast Action Group seek an injunction directing PG&E to stop operating the project in a way that constitutes a "take" of an endangered species.

Greacen said he does not support the lawsuit filed Friday. The conservation director and attorney said he reviewed the groups' right-to-sue letter, sent on April 17, and was dismayed by the "lack of clarity regarding the mechanisms of the harm they’re alleging."

He added, "There’s very little evidence Coho can or will ever use the Eel in the area of or above the dams. The fish that are affected by the dams are really Chinook and steelhead, not Coho."

The conservation groups' attorney, Edward Yates of Larkspur, responded in a phone interview by citing a February 2010 study by fisheries biologist Patrick Higgins that found the Potter Valley project has adversely impacted the survival and recovery of Coho salmon.

"There's great potential for restoration of Coho habitat," Yates said, adding his clients want a judge to order PG&E to cease and desist activities on the Eel River that harm endangered fish.