Ms. World 2016 says she has no political leanings, but a Facebook page uses her as the face of a “fake news” conservative website, Laura Hunter claims in court. 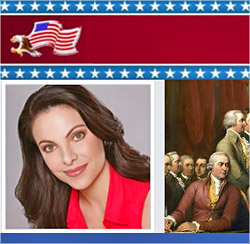 LAS VEGAS (CN) — Ms. World 2016 says she has no political leanings, but a Facebook page uses her as the face of a “fake news” conservative website, Laura Hunter claims in court.

Hunter won the Ms. World 2016 beauty pageant and describes herself as an actress, model and photographer in her Feb. 21 lawsuit in Clark County court.

She sued Michael Powell and his Gravitas Advertising and SCMA Holding companies, both of Las Vegas.

“This case is about the infamous industry known as ‘fake news,’” the complaint begins. “A ‘fake news’ organization stole an innocent person’s identity and is using it to falsely proclaim that she is the spokeswoman for this fake news enterprise.”

Hunter says that on Oct. 25, 2016, she received an email from Powell that said he runs an advertising agency in Las Vegas and wanted to use one of her headshots. Powell asked her to sign a release to use her photo, but she did not, Hunter says.

Later, Powell admitted he already had used her photo; then she learned he’d created a fake Facebook profile called LauraHunterCDR, using her name and photo, according to the complaint.

Hunter says the top search result on Google using her name is the fake Facebook page, and that Powell “turned her persona into a highly rated spokesperson for a right-wing political website called the Conservative Daily Review.”

That appeared to still be the case in a Google search Friday morning.

Hunter says the headshot on the website is the same one Powell included in his Oct. 25 email to her, but the Facebook page is not hers, nor is she affiliated with it or Conservative Daily News in any way.

The Facebook page has nearly 900,000 likes and followers, but Hunter says she is not conservative, and never gave permission to use her likeness or name on the Facebook page.

She says the page posts multiple articles every day that redirect readers to conservativedailypost.com, though she is “none of the things defendants claim her to be.”

“They have stolen her identity and used her as a spokeswoman for and purported author of content and viewpoints antithetical to her own beliefs,” Hunter says.

She calls ConservativeDailyReview.com “a website dedicated to spreading false information about American politics; it is part of the epidemic of ‘fake news’ sites that plagued the 2016 presidential election.”

The second-listed Google result Friday morning was a link to the Conservative Daily Review’s webpage, showing Hunter’s headshot and a biography, which states: “Laura Hunter is a well-known blogger and political activist known for her constant stream on Facebook. She has been in the reporting and journalism world for almost two decades and has witnessed countless elections and large propositions come and go. Currently, her passion lies with grass-roots movement within America that look to put the Bill of Rights back on its rightly throne.

“Laura Hunter is single and enjoys living with her dog in Eastern Tennessee. When she isn’t writing or looking to spread the word about true Patriotism, she enjoys hiking and camping with friends and family.”

In ads for writers, Hunter says, the site seeks people “who can write ‘stories [that] are not real, but very well could be. You will write them in such a way that they seem factually correct but hard to verify.’”

She seeks disgorgement of unjust profits, punitive damages for violations of rights of publicity, false light and misappropriation of her name and likeness, and an injunction.

A message at the contact phone number listed on the Conservative Daily Review's website Thursday morning said it is not accepting calls.

Hunter is represented by Marc Randazza in Las Vegas, who said in a telephone interview that because the Conservative Daily Review essentially made her its spokeswoman without her permission, Hunter lost clients at her Seattle-based photography business.