House Democrats on Thursday released the transcript of a State Department official who says he had concerns about U.S.-Ukraine diplomatic policy but was rebuffed.

WASHINGTON (CN) – House Democrats on Thursday released the transcript of a State Department official who says he had concerns about U.S.-Ukraine diplomatic policy but was rebuffed.

Kent is the deputy assistant secretary of State for European and Eurasian Affairs. Last month, during his testimony before the House Intelligence, Foreign Affairs and Oversight committees, he relayed a litany of concerns he had regarding apparent attempts by Giuliani to “throw mud” at State Department officials like former U.S. ambassador Marie Yovanovitch.

Representative Mike Quigley, D-Illinois, pressed Kent about why be believed Yovanovitch was recalled and when he first became aware of Giuliani’s “activities in Ukraine.”

“What was your understanding while this was happening of what his role was?” Quigley said. “A personal attorney working somehow for the government working as a campaign person's attorney?”

Kent said that, to the best of his knowledge, Giuliani had no contact with anyone at the State Department during the first phase of his talks with Ukrainians and his “efforts to orchestrate a media campaign.”

“When I say the first phase, that is essentially the phase involving Prosecutor General Yuriy Lutsenko through the election of President Zelensky which occurred on April 21,” Kent said.

It was at some point in July, Kent said, when Kurt Volker, the special envoy to Ukraine at the time, disclosed that he would be reaching out to Giuliani.

Kent believed Lutsenko wanted revenge because he was “bitter and angry” for the U.S. Embassy’s position on anti-corruption in Ukraine. That prompted him to spin a negative narrative about Yovanovitch to Giuliani — one that Kent said Lutsenko expected would lead to her removal.

It would become a “campaign full of lies and incorrect information” about Yovanovitch run by the president’s personal attorney, Kent testified.

Kent also noted that the campaign against Yovanovitch was aided by Lev Parnas and Igor Fruman, two Ukrainian-born business contacts of Giuliani.

Parnas and Fruman were indicted in New York last month. As described in that case, the pair continued to prod Giuliani to lean on Ukraine for an investigation federal prosecutors while also arranging a meeting with then-Congressman Pete Sessions.

Offering the Texas Republican $20,000, Parnas and Fruman sought to enlist Sessions’ assistance “in causing the U.S. government to remove or recall the then U.S. Ambassador to Ukraine.”

Come August, Kent felt concerned enough to lay out his grievances in a memo, describing a diplomatic back channel that had, at that point, been operating for weeks between the U.S and Ukraine.

“There was an effort to initiate politically motivated prosecutions that were injurious to the rule of law, both Ukraine and U.S.,” Kent testified. “At that point it was clear that the investigations that were being suggested were the ones that Rudy Giuliani had been tweeting about, meaning Biden, Burisma and 2016.”

Kent also told impeachment investigators that his conversations with fellow diplomats like U.S. ambassador to the European Union Gordon Sondland made it crystal clear what President Trump wanted from Zelensky.

Trump, “in sort of shorthand, wanted nothing less than President Zelensky to go to the microphone and say investigations, Biden and Clinton,” Kent testified.

That “shorthand” for Clinton was a thinly veiled reference to the conspiracy theory pedaled by President Trump and Rudy Giuliani that it was Ukraine, not Russia, that meddled in the 2016 elections.

Notably, Thursday’s transcript also reveals the varied response Kent received from fellow officials at State when he raised the alarm about Giuliani.

In May, after Giuliani blasted Yovanovtich in a public interview, Kent said he was instructed by David Hale, the State Department’s undersecretary for political affairs, to keep his “head down” and lower his profile on matters related to Ukraine.

About a month later, Kent recalled, Volker recommended that he take a more hands-on approach to Trump’s personal attorney.

Kent said he questioned Volker about why they should stay in contact with Giuliani as the smear campaign against Yovanovitch gained steam.

“That’s when he said … former Mayor Giuliani was an influence on the president’s thinking of Ukraine that he, Kurt Volker, felt it was worthwhile engaging,” Kent said. “What I understood was Kurt was thinking tactically and I was concerned strategically.”

Volker believed if there was nothing to the disinformation pedaled by Giuliani, it wouldn’t matter anyway. But for Kent, the idea of unleashing Giuliani was unsettling. It could lead to a troubling precedent later, Kent believed.

Kent also said the State Department ignored his requests that it issue a statement endorsing Yovanovitch.

As Yovanovitch’s role at State hung in the balance, Kent revealed that Ambassador Sondland offered the suggestion that Yovanovitch curry favor by producing a video or tweeting out full-fledged support of the administration’s foreign policy. 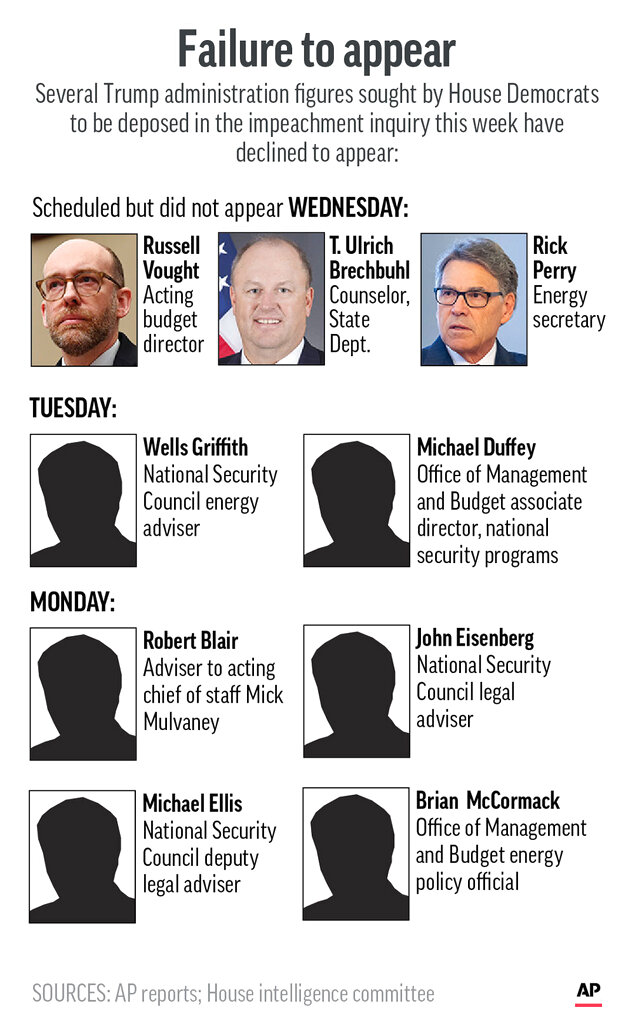 Kent said he thought State Department counselor T. Ulrich Brechbuh may have first made the suggestion Yovanovitch pledge fealty to the president but he wasn’t sure. Brechbuhl has steadily rebuffed requests to testify before the investigating committees. Another key figure in the impeachment inquiry, acting White House chief of staff Mick Mulvaney, has also ignored requests for testimony but Thursday’s transcript puts him back in the spotlight.

Kent testified that Sondland’s “connections” with Mulvaney earned the European Union ambassador unprecedented access to high-level meetings with Trump and access to matters involving Ukraine, even though the nation was not technically in his European Union portfolio.

This information runs contrary to earlier testimony from Sondland, who described his relationship to Mulvaney as one mostly had in passing.

“We say hello, we walk by and wave,” Sondland said. “But I’ve never – I don’t believe I’ve sat down with him for a formal meeting on any subject.”

Sondland’s testimony, which he revised heavily this week, has raised several questions under further scrutiny.

Among other details, Sondland told lawmakers the Ukrainian government was told they would have to publicly commit to the political investigations Trump if they wanted military assistance.