The daughter of late radio star Casey Kasem claims in federal court that a rookie movie producer is demanding $100,000 “ransom” for footage they shot for a documentary about elder abuse.

SANTA ANA, Calif. (CN) — The daughter of late radio star Casey Kasem claims in federal court that a rookie movie producer is demanding $100,000 “ransom” for footage they shot for a documentary about elder abuse. 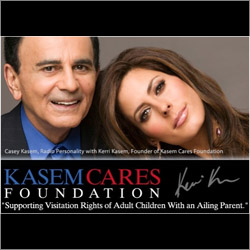 Kerri Kasem and her charity Kasem Cares claim that Cameron Glenar and his Rose Street Productions are refusing to move ahead with the stalled project or deliver to her the raw footage for the feature-length film without a fresh infusion of capital.

Glenar said in promotional materials that his goal for the film was to save lives, but his “intentions suddenly and inexplicably changed” in June, Kasem says in the Nov. 9 complaint.

Glenar did not respond to an inquiry emailed to his production company on Thursday.

Kasem’s attorney Jesse Kaplan, with Freedman + Taitelman, did not return a phone call.

Casey Kasem was a nationally famous Top 40 disk jockey and voice actor who died in 2014 of complications from dementia.

During the final months of his life and for a time after, he was at the center of a legal battle between his second wife, Jean Thompson Kasem, and his three children from his first marriage, including Kerri Kasem. For a time, Jean Kasem prevented the children from visiting their ailing father, eventually moving him from Southern California to Washington State, where he died.

As a result, Kerri Kasem says in the lawsuit, she became “an outspoken advocate for visitation rights and elder abuse awareness,” and helped found Kasem Cares to assist children kept from their elderly parents and to increase awareness of elder abuse.

Glenar was a producer working primarily on reality TV shows when he contacted her in 2014 “to voice his support and share a similar experience concerning his elderly father,” Kasem says in the complaint.

He came up with the idea to create a documentary focusing on her charity’s work and her own experience. But his idea was “nothing more than an unrefined and vague concept,” and “Glenar conceded that he did not have the knowledge or experience to produce a documentary,” Kasem says.

In late 2015, Kasem and her charity and Glenar and his production company began shooting the documentary using Kasem’s materials and interviews with people who had contacted Kasem Cares. The working title was “Isolated,” according to a Kickstarter webpage about the project.

Kasem and Glenar “understood that it was unlikely that the documentary would make any money,” Kasem says in the lawsuit. But at least half of any revenue would go to the charity, according to their “oral or implied agreement,” she says.

She says Kasem Cares provided much of the content for the documentary and was the “fiscal sponsor” and fund raiser of the project. Kasem says she retained creative control and “made valuable and copyrightable creative contributions” to it.

But in June this year, Glenar and Rose Street isolated her from the film, “refused to move forward with production of the documentary” and “sought to exclude Kasem and Kasem Cares” from the project, according to the complaint.

Glenar and his company told the charity “that if it wanted the documentary ‘bad enough,’ Kasem Cares would have to purchase the footage from Glenar,” Kasem says. “Most recently, Glenar demanded $100,000 for the raw documentary footage.”

Kasem demands delivery of the film and punitive damages for breach of contract, breach of fiduciary duty, and copyright violations.