A couple who lost eggs because of a freezer meltdown at a Cleveland fertility clinic is seeking a wide-ranging legal declaration that an embryo is a person, as they seek damages in a separate class action. 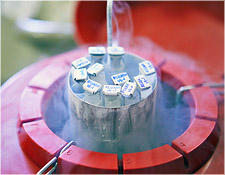 CLEVELAND (CN) - A couple who lost eggs because of a freezer meltdown at a Cleveland fertility clinic is seeking a wide-ranging legal declaration that an embryo is a person, as they seek damages in a separate class action.

Cleveland University Hospitals is facing multiple lawsuits after someone turned off a remote alarm system last month for the cryogenic freezer at the Ahuja Medical Center in Beachwood, Ohio. Rising temperatures in the freezer over a weekend in early March destroyed hundreds of eggs and embryos. Because of the human error, no staff was alerted off-site.

Wendy and Rick Penniman, who filed a class action lawsuit on March 12, filed a new complaint Friday seeking a declaratory judgment that life begins at conception, making their embryo a “person” for the purposes of standing in the case. They had three viable embryos frozen at the clinic, according to their complaint filed in Cuyahoga County Common Pleas County by lead attorney Bruce Taubman.

Taubman said the hospital was classifying the embryos as property, or "chattels," rather than people, and that he was fighting to give the embryos standing to support a cause of action for wrongful death. He anticipated that the case would end up at the Ohio Supreme Court.

"Lots of my clients are very, very sad because the children that they have will never be able to have a sibling or a sister or brother," Taubman said in a phone interview. "Now, none these children, if we classify the embryos as chattels, have any rights or causes of action. Perhaps if they're classified as life, they would have a cause action or standing."

University Hospitals did not immediately respond Monday to a request for comment on the new lawsuit.

It initially announced that up to 2,000 eggs and embryos were affected. But in a March 26 letter, the hospital revised that number upwards to 4,000 and said that losses had impacted the lives of 950 patients.

“These failures should not have happened, we take responsibility for them – and we are so sorry that our failures caused such a devastating loss for you,” the letter states.

On Saturday, March 3, through the morning of Sunday, March 4, there were temperature fluctuations in the liquid nitrogen storage tank that caused the eggs and embryos to thaw. No employees were on-site at that time.