Wisconsin high school resource officers have found themselves on the front lines in two student shootings in the past two days, underscoring how police in schools can face life-or-death situations and likely adding to the debate over the best ways to respond to school threats.

OSHKOSH, Wis. (AP) — Wisconsin high school resource officers have found themselves on the front lines in two student shootings in the past two days, underscoring how police in schools can face life-or-death situations and likely adding to the debate over the best ways to respond to school threats. 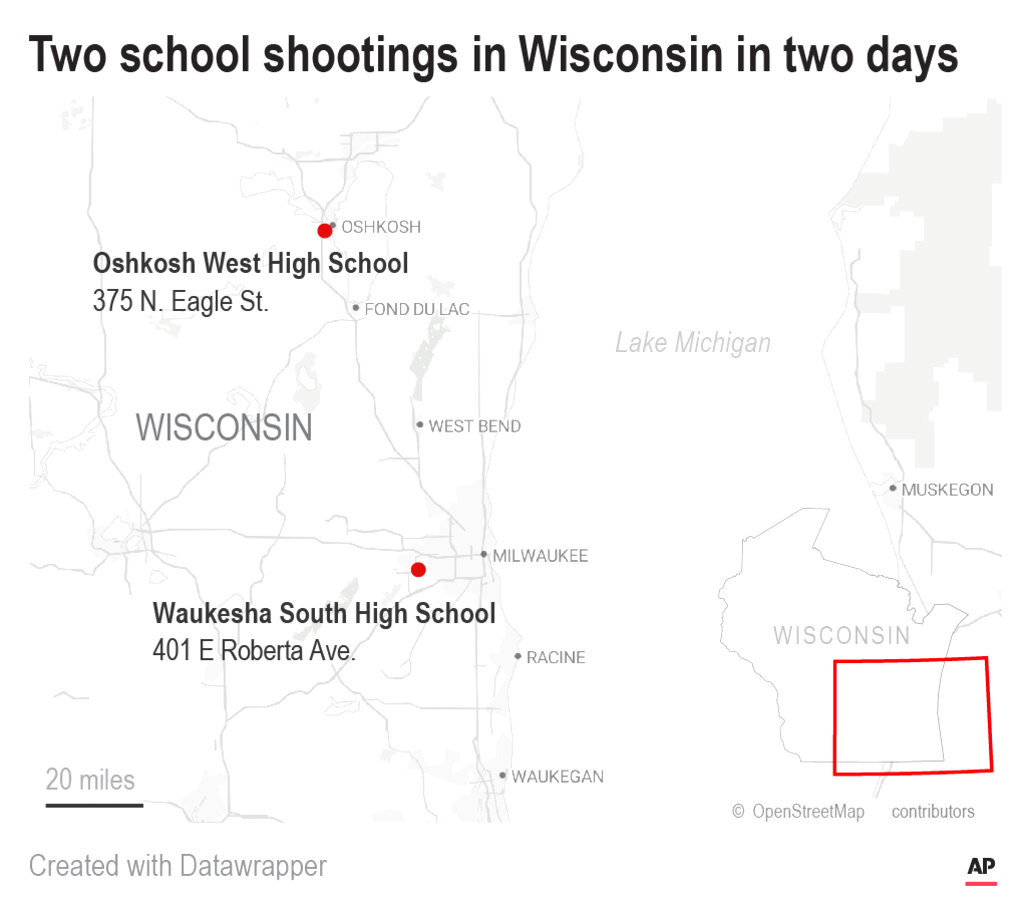 An Oshkosh Police Department resource officer shot a 16-year-old student Tuesday after the boy stabbed him in the officer's office at Oshkosh West High School. A day earlier, a resource officer at Waukesha South High School helped clear students out of a classroom after a 17-year-old student pointed a gun — it turned out to be a pellet gun — at another student's head. Another police officer entered the room and shot the student. No one in either incident suffered life-threatening injuries.

The debate about the role of armed teachers or police in schools has been a constant in the wake of school shootings across the country. But rarely have armed resource officers been able to prevent a shooting.

An estimated 43% of public schools have armed officers on campus, according to a survey by the National Center for Education Statistics. The survey covered the 2015-2016 school year, the most recent year surveyed. That figure doesn't include schools with armed private security guards or teachers and administrators who carry guns.

NASRO recommends such officers have three years of experience and says they should be willing to engage with students and have excellent communication skills. They should complete a school-based policing course before being assigned to the beat and complete an advanced school policing course NASRO provides within a year of completing the basic course. They also should complete bi-annual training on how lone officers should handle threats and assailants.

No Wisconsin laws spell out any special requirements for resource officers or restrictions on their weapons. But the state Department of Justice has adopted best practices similar to NASRO's recommendations, calling for officers to work with schools on the extent of their duties, the skills they need, and where school discipline ends and illegal conduct begins. The state guidelines also suggest officers receive training in child development, restraint policies and de-escalation strategies.

It's not clear what led to Tuesday's stabbing at Oshkosh West High School, which has 1,700 students. Police Chief Dean Smith said only that the officer and the student got into an "altercation" in the officer's office, the student stabbed the officer with an edged weapon — Smith declined to elaborate — and the officer opened fire with his 9 mm pistol, hitting the student once. It's unclear how many times the officer may have fired.

At Waukesha South High School, 80 miles south of Oshkosh in suburban Milwaukee, the student apparently grew angry with another student and pointed a pellet gun at the other student. The school's resource officer helped clear students from the classroom.

Linda Ager told the Milwaukee Journal Sentinel that the Waukesha shooting happened in the classroom of her husband, Brett Hart, a special education teacher at Waukesha South. Ager said her husband restrained the student until the resource officer arrived.

At some point, another officer entered the room and shot the student who refused to drop the weapon.

As school shootings have become more frequent, gun rights advocates and gun control advocates have sparred over how best to respond to them. Supporters of gun restrictions have argued that putting more guns in schools does little to prevent shootings and just puts students at greater risk.

Last year, for example, armed guards at three high-profile school shootings — Marshall County High School in Benton, Kentucky; Majory Stoneman Douglas High School in Parkland, Florida; and Santa Fe High School in Texas — were unable to stop those shootings. In Parkland, the school's resource officer remained outside rather than enter the building to engage the shooter and try to stop it.

But gun-rights advocates believe having more armed educators and law enforcement in schools will help stop a shooter from going on a rampage.

On Tuesday, U.S. Sen. Ron Johnson, a Republican, praised the officers in Oshkosh and Waukesha.

"This confirms that action can — and should — be taken to mitigate harm and limit casualties when weapons are brought into school," Johnson said.