Vice President Mike Pence made a stop Tuesday in Fargo, North Dakota to promote Kevin Cramer's race for the Senate coming up in November. 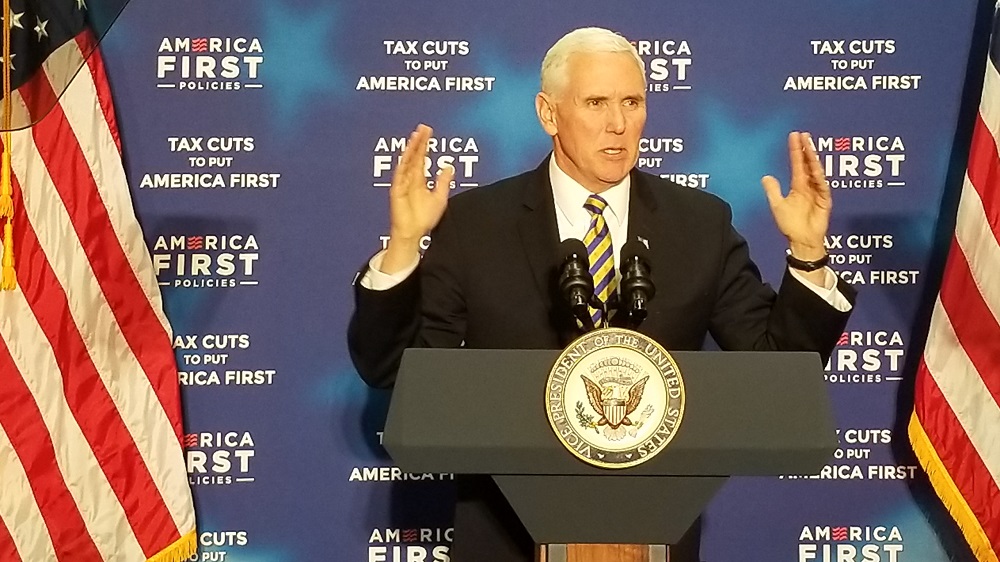 Pence was the featured speaker for the "America First Policies" group, a conservative nonprofit started by former advisors to President Donald Trump, that drew in North Dakota residents for a talk on the Tax Cuts and Jobs Act.

Pence wasted no time in addressing the tax plan by thanking the people of North Dakota for "giving them a President and a Congress that enacted tax cuts to put America first."

"This great state grows this nation's food, it pumps this nation's energy, and the good people of North Dakota literally embody the resilience and the spirit of America itself," Pence said, quoting President Trump from his previous visit to North Dakota during the election.

Pence spoke about the individual items within the tax plan, and about how it is helping the people of North Dakota. Multiple items addressed included the death tax, child and family incentives, and cutting the cornerstone of the "disastrous Obamacare."

The tax plan was a key element of the event but other issues were addressed as well.

The vice president said he was proud to report that illegal crossings from the border were cut by 50 percent and that funding for a border wall was nearly fully procured.

The issue of safety in America was brought up a number of times, focusing on issues ranging from school shootings to the "scourge of opioid addiction."

"No child should ever be in danger in an American school," Pence said, "and last week with the President's leadership and Senator [John] Hoeven's support, Congressman Cramer's support, we dedicated two billion dollars to improve school safety and pass legislation to strengthen our criminal background checks," referring to the bipartisan Fix NICS (National Instant Criminal Background System) Act.

Pence heavily promoted Sen. Hoeven and Congressman Cramer who is currently running against Sen. Heidi Heitkamp to give North Dakota two Republican Senators and did not mince words when describing Sen. Heitkamp's policies.

"She voted no on protecting the unborn," said Pence, which prompted overwhelming booing from the audience.

The panel's goal was to discuss and inform the public about how President Trump's Tax Cuts and Jobs Act was having a positive impact on the average citizens in the State.

Sen. Hoeven talked about the act's impact on wages, economic growth and energy production while addressing wage and GDP stagnation before the Trump administration's policies.

"Small business is the heart and soul, the backbone of our economy," said Hoeven, who spoke at length about North Dakota's importance surrounding business and energy. Hoeven went on to credit the Trump tax plan to North Dakota's success, saying that an unnecessarily complex tax code was causing problems for business and the average worker.

Following the panel, Gov. Doug Burgum spoke about his first phone experience with the vice president, telling the story following his election as North Dakota's governor.

"I see an unknown number and I think it's a telemarketer, so I let it ring to voice mail,” Burgum said. “Day or two later I listen to my voicemail, It's the vice president elect of the United States of America calling to wish me congratulations."

The vice president concluded his speech with a brief prayer and was met with "amens" from the crowd and a standing ovation.

"It was very inspirational," said Richard Jaehning, who came to hear the vice president speak. "He focused on jobs, and anything that is good for jobs is good for the state."

The event was at capacity as roughly 100 people were not allowed access according to a woman and her mother who were turned away at the door. They waited behind the hotel to catch a brief glimpse of the vice president.

The woman and her mother, both wheelchair bound, joked about their inability to gain entrance after having tickets and waiting in line for hours.

"It's not like they needed more chairs for us,” she said. “We brought our own."