Maine Gov. Paul LePage sued the state attorney general on Monday, claiming her refusal to represent him in federal cases is an abuse of power costing taxpayers hundreds of thousands of dollars in outside legal fees. 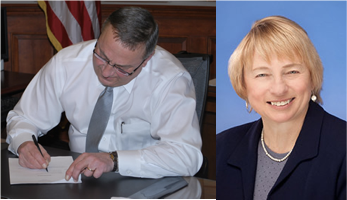 AUGUSTA, Maine (CN) - Maine Gov. Paul LePage sued the state attorney general on Monday, claiming her refusal to represent him in federal cases is an abuse of power costing taxpayers hundreds of thousands of dollars in outside legal fees.

Since taking office in 2013, Attorney General Janet Mills has declined to represent the Republican governor on several high-profile cases, including his appeal when the federal government denied LePage’s request to eliminate Medicaid coverage for thousands of low-income young adults in the state.

Mills has been outspoken in critiquing the legality of certain LePage regulations — including his attempts to prevent immigrants and asylum seekers from receiving state aid. LePage in turn drafted a bill that would curtail the attorney general's power to sign off on state agency rules.

“It is no secret that Attorney General Mills and I have differing political views, but that is not the issue,” LePage in a statement about his lawsuit in Kennebec Superior Court.

“The problem is she has publicly denounced court cases which the Executive Branch has requested to join and subsequently refuses to provide legal representation for the state. This clear abuse of power prevents the chief executive from carrying out duties that in his good faith judgment is in the best interest of the people of Maine.”

Letters between LePage and the Attorney General's Office, which the governor included in his 11-page complaint, reveal a series of testy exchanges over President Donald Trump’s attempts to institute a ban on U.S. entry for travelers and refugees from certain Muslim-majority countries.

Trump’s two attempts at instituting such a ban via executive order have faced a series of court challenges and injunctions. Mills publicly opposed Trump’s first executive travel-ban order and joined in an amicus curiae brief in opposition to it in the case Washington v. Trump.

Maine’s Supreme Court established in a 1991 ruling that the attorney general is not required to defend the state in lawsuits. In 2015, LePage sought clarification of whether the attorney general could deny the hiring of outside counsel. The court upheld Maine law that the executive office must seek permission from Mills before bringing in private lawyers.

After Trump signed the second executive order on the travel ban, LePage requested Mills personally appear for him and the state of Maine in the litigation, submit a brief as amicus curiae for the state of Maine supporting the order, and consult with him regarding further pleadings in the case.

Mills declined, and through a March 15th letter Deputy Attorney General Phyllis Gardiner responded that LePage was authorized to retain outside counsel.

”The attorney general has never denied the governor the ability to retain outside counsel in any particular matter,” she said in a statement. “We have simply said that whoever the governor chooses should be licensed to practice law and should carry malpractice insurance, two common sense prerequisites which any prudent business person would employ as well.”

Mills noted that LePage ignored some of the thriftier options available to him.

“Instead of signing onto another party’s brief at no cost to the taxpayers, however, or hiring a lawyer to draft his own brief, the governor has wasted state resources by hiring a lawyer to file a frivolous law suit, complaining that he cannot do exactly what we have told him he can do,” she said.

LePage maintains in his lawsuit that Mills’ refusals "have resulted in hundreds of thousands of dollars in outside attorney fees, which Maine taxpayers are forced to pay."

It's unclear if taxpayers are footing the bill for his suit against Mills. LePage added to the confusion by calling in to the radio station WVOM on Tuesday morning, telling listeners that the suit was being paid for by a contingency fund.

The governor's suit seeks an order that if the attorney general refuses to represent him, then she must authorize him to retain independent counsel without imposing constraints, and that the cost of hiring an outside attorney must be paid out of the appropriation for the attorney general.