Studying the appetite for gene editing around the world, Pew reported Thursday that the controversy over so-called designer babies becomes less pronounced when the same tools are used to fight disease or infertility.

(CN) — Studying the appetite for gene editing around the world, Pew reported Thursday that the controversy over so-called designer babies becomes less pronounced when the same tools are used to fight disease or infertility.

Pew researchers conducted the survey between late 2019 and early 2020, interviewing more than 32,000 over the phone and in person in countries from Europe, the Asia-Pacific region, as well as the United States, Canada, Brazil and Russia.

Their findings show that 63% of people globally believe that gene editing is a misuse of technology, though 70% said the use can be legitimate if it prevents serious illnesses before a baby’s birth.

Just 14% of those who took the survey called it appropriate to change a baby’s genes to enhance intelligence.

No longer just a matter of theory, the topic of gene editing became a more realized for the public with the announcement two years ago from scientists in China that they had used CRISPR technology to edit create the genes of a pair of twins born in Beijing.

Amid an outcry over ethics within the scientific community, the scientist He Jiankui was convicted last year in Shenzhen of practicing medicine without a license.

Pew’s report breaks down survey results by religion and age (all participants were 18 or older), finding that Christians tend to be more wary of biotechnology compared with those who are not religious, particularly in western countries.

Just 21% of American Christians consider gene editing to be an appropriate use of technology, compared with 47% of those religiously unaffiliated. Similar trends exist in the United Kingdom, Sweden and the Netherlands.

In India, Hindus and Muslims were equally likely to see gene editing as appropriate, with 56% of adults holding the view that they are — the highest approval level recorded in the survey.

Younger adults tended to be more likely to say gene editing is appropriate, and to give the OK to other biotechnology procedures, like animal cloning and technology that helps to facilitate pregnancy.

Cary Funk, Pew’s director of science and society research, said the adoption of biotechnology advances could have a lot to do with public perceptions.

The new findings “point to decidedly mixed public views about gene editing across global publics with acceptance strongly dependent on the uses and applications of these new tools,” Funk said in a statement.

Françoise Baylis is a professor at Dalhousie University and member of the World Health Organization’s advisory committee for governing human genome editing.

Baylis described how the WHO has stepped up its regulations following the CRISPR babies announcement in an article for The Conversation. The WHO has called on regulatory and ethics authorities “to refrain from approving research on heritable human genome editing until its ethical and social implications had been properly considered,” Baylis wrote.

She noted that we still don’t know the outcome of the genetically modified babies, and that sorting out the ethics of biotechnology is a process that can take time.

“We need time to carefully consider the kind of world we want to live in and how human genome editing technology might or might not help us build that world,” Baylis wrote. “We can’t do this work properly if scientists brashly go about the business of making genome-edited babies.”

Beyond gene editing, the new Pew findings suggest that public opinions on animal cloning are much more negative than positive, with a median of two-thirds of survey respondents saying the practice is a misuse of technology. France, Germany, Italy, the Czech Republic and the Netherlands were particularly down an animal cloning, the survey says.

Pregnancy technology, conversely, was mostly supported: A median of nearly three-quarters of people said using technology to help people get pregnant is appropriate, with men and women expressing similar opinions on the matter. 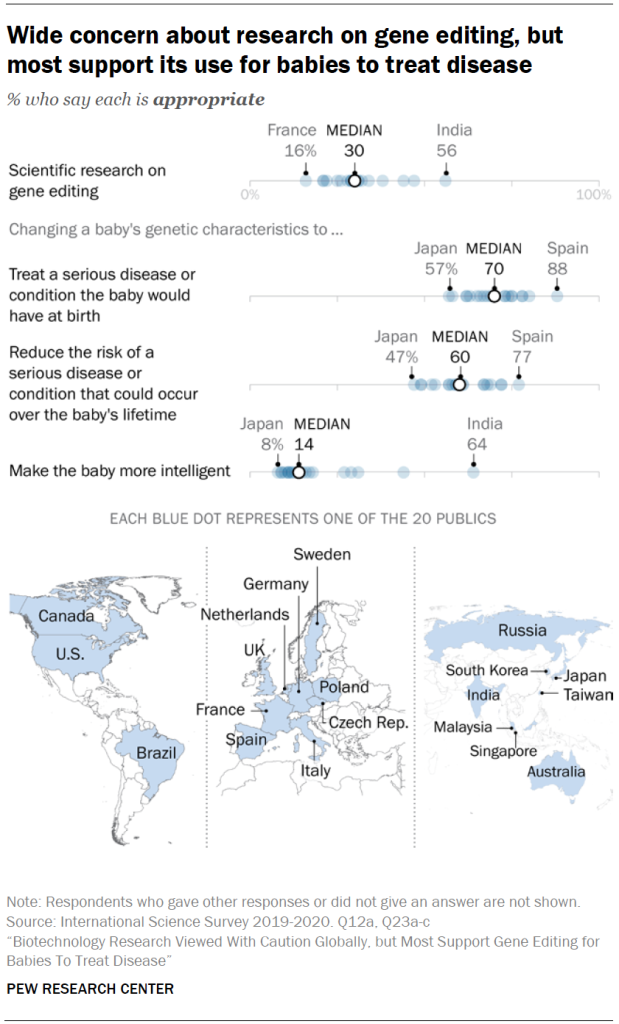