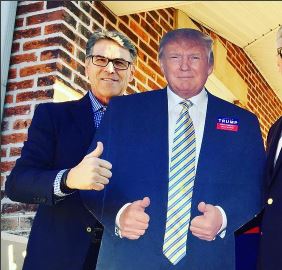 Perry was the second of Trump's nominees the Senate confirmed on Thursday, following Ben Carson's confirmation as the new secretary of Housing and Urban Development earlier in the day.

The Senate voted to confirm Perry 62-37, a common margin after some of Trump's more controversial nominees made their way through confirmation.

Alexander Acosta, who is nominated to serve as secretary of labor, and Sonny Perdue, Trump's choice to lead the Department of Agriculture, are the only two cabinet members who have not been confirmed by the Senate. Other top administration spots, like the director of national intelligence, remain open but are not technically considered cabinet positions.

Perry has in the past been skeptical of climate change and during one of his unsuccessful presidential campaigns called for the elimination of the Department of Energy, which he will now lead. At his confirmation hearing in January Perry said his past comments on the department "do not reflect my current thinking."

These statements and positions have led many Democrats to vocally oppose Perry's nomination, saying he is too close to oil corporations and unqualified for the job.

"If confirmed to head up the Department of Energy, Governor Perry would join the ranks of other unqualified candidates chosen by this president to lead critically important agencies with very specific and complex functions," Sen. Patty Murray, D-Wash., said on the floor before the vote. "It's a big job and I believe that getting the top spot at the Department of Energy or anywhere else in the president's cabinet should not simply be a prize for demonstrating loyalty during an election."

But Republicans flocked to the pick, citing Perry's economic record as governor of Texas.

"Put another way, Governor Perry has a very strong track record when it comes to promoting energy in a way that makes everybody better off," Sen. John Cornyn, R-Texas, said on the floor before the vote. "I have no doubt that Governor Perry will take these same principles that led to the Texas success story to the rest of the country and open up America to a new energy renaissance."