The New York City Police Department was hit with a lawsuit on Thursday to cough up handgun license applications submitted by President Donald Trump and his sons, Donald Trump Jr. and Eric Trump. 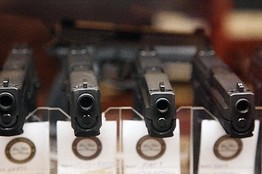 MANHATTAN (CN) – The New York City Police Department was hit with a lawsuit on Thursday to cough up handgun license applications submitted by President Donald Trump and his sons, Donald Trump Jr. and Eric Trump.

“[The NYPD’s] failure to fulfill their public disclosure obligations has stifled public knowledge of matters of great public interest regarding the president and his sons (who are also his advisors on gun-related issues), their applications for and ownership of guns, and hand gun licensing practices in New York City in general,” attorneys for the Daily Dot wrote in an 9-page petition. “Such secrecy benefits no one and erodes public trust in government. The documents should be disclosed.”

Trump’s concealed-carry license was also the subject of a Politico article in February.

Elite Daily ran a story in March on how his son Trump Jr. trekked to Pennsylvania to obtain the same license weeks after the school shooting in Parkland, Florida.

The Daily Dot cites both reports in a footnote of their complaint.

As the Trump family’s gun ownership collided with national debate, the news outlet filed a Freedom of Information Law request on Jan. 25 this year, receiving a rejection a week later from NYPD Lieutenant Richard Mantellino on privacy grounds.

“The denial letter stated that, in addition to constituting an unwarranted invasion of personal privacy, disclosure of the requested handgun license applications ‘would endanger the life or safety of the applicant,’” the petition states.

Rejecting these excuses, the Daily Dot argues: “None of the grounds for nondisclosure cited by the NYPD apply.”

Mantellino and records access appeals officer Sergeant Jordan Mazur are named as defendants along with the NYPD.

“Disclosure of the information sought by The Daily Dot would not constitute an unwarranted invasion of the personal privacy of President Trump or his sons,” the petition continues. “Nor would disclosure of the requested information endanger the life or safety of any person.”

The outlet argues that those exceptions are meant to protect jury participants, retired police officers, individuals with valid orders of protection, witnesses to criminal proceedings, and their family members.

“It is not conceivable that President Trump, Donald Jr., and/or Eric's lives would be endangered or that they would be harassed because of the disclosure of the requested records,” the petition states. “Even if any exemptions were applicable, the Trumps have waived the exemptions by virtue of their many public statements disclosing their gun ownership and other information contained in their handgun license applications.”

The NYPD referred comment to the New York City Law Department, which did not respond to a request for comment by press time Thursday.