The Monterey Peninsula is running out of water.

(CN) – The Monterey Peninsula is running out of water.

The fog-shrouded, cypress-dotted land formation jutting into the Pacific Ocean forming the southern reach of the Monterey Bay is drying up as underground water aquifers become increasingly depleted. 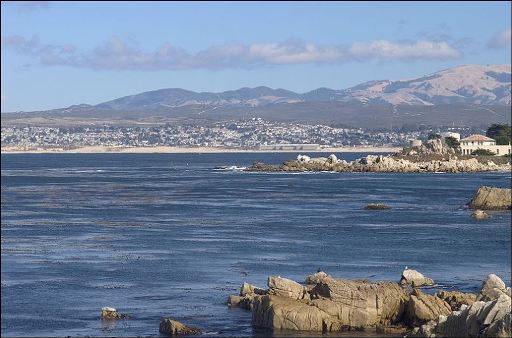 The lack of water inhibits economic growth, prevents the development of housing – including the affordable variety – and restricts commercial opportunity.

“One hotel in Monterey has to send its laundry out of the area to run its business,” said DJ Moore, an attorney trying to demonstrate the water scarcity on this portion of California’s Central Coast.

Moore told the story as he attempted to persuade the California Coastal Commission that building a $329 million desalination plant in Marina, a small city just north of Monterey, would give the region a much-needed boost of water reliability and diversify its water supply portfolio.

“Desal is needed,” the attorney said. “It will provide economic growth, affordable housing and it will bridge the gap between supply and demand.”

Moore represents California American Water Company, a private water supplier that provides about 85% of the Monterey Peninsula’s water. In order to build the Monterey Water Supply Project, a desalination plant that will utilize a slant well to funnel ocean water underground via a network of pipelines to an inland plant, it needs the permission of the coastal commission.

“There will be no diversions from the Carmel River during the summer months beginning in December 2021,” said CalAm president Rich Svinland during the meeting. “Missing that deadline would be devastating.”

CalAm said it is in a bind because it draws most of its water from the Carmel Water, pulling about 8,000 acre-feet per year. But the company will only be able to pull about 3,300 acre-feet per year from the river after the California State Water Resources Board sent CalAm a cease-and-desist letter in 1996, saying large diversions from the river was destroying the population of the endangered Central Coast steelhead, which makes its home in the Carmel River.

CalAm said a desalination plant will make up the water deficit, set to take effect in December 2021, by creating an additional annual supply of 6,250 acre-feet.

But coastal commission staff said there may be a better, less environmentally harmful alternative to a desalination plant that requires further analysis.

But many officials closely related to Pure Water Monterey are not quite sure the project is ready for primetime.

“We’re pushed out over our skies here,” said John Gaglioti, a board member of Monterey One Water, one of the organizations working on the recycled water plan.

Gaglioti said Pure Water Monterey was never meant to be a replacement to desalination, but a supplement to create more supply diversity.

“It was never meant to be the critical path,” said Gaglioti.

Regardless of the water recycling plant’s current viability, it was clear that many Monterey Bay residents oppose desalination.

The conference room at the Oceano Inn in Half Moon Bay – where the monthly coastal commission meeting was held – was full with Monterey Bay residents waving small white placards with a picture of a snowy plover on the front and various slogans like “Deny Desal” on the back.

Several speakers said the construction of slant wells or intake pipes on a 36-acre part of the dune-dappled stretch of coast was of particular concern. The dunes in the area of the proposed project are characterized as sensitive habitat by the coastal commission.

Furthermore, desalination opponents say the capital outlays associated with the project will goose water rates for all ratepayers served by CalAm, including residents of three low-income cities in the region: Castroville, Marina and Seaside. The coastal commission’s environmental staff conducted field interviews with residents in those towns, the majority of whom expressed concern about the economic impacts of water rates that are expected to nearly double as a result of the project.

CalAm said it offers rate assistance to low-income customers and that rates for the average customer will decrease, although averages are not as effective as medians to determine the impact to the majority of ratepayers.

Ultimately, the coastal commission punted a final decision on the fate of the desalination plant located in Marina. Instead, commissioners and staff said they needed more time to analyze whether Pure Monterey Water is truly the feasible alternative to desalination that opponents claim.

“The commission has to decide how to provide the community a reliable water source with the least damaging environmental effects,” said Jack Ainsworth, executive director of the Coastal Commission.

The coastal commission has the authority to determine the fate of several desalination plants located up and down the coast. For instance, Huntington Beach is also considering the construction of a plant in Southern California.

Poseidon Water, the company in charge of that project, will eventually come before the coastal commission seeking a permit similar to CalAm’s.

Ainsworth said any future denial of the desalination plant in one location would not set a precedent for desalination in the coastal zone in other areas of the Golden State.

“It may be appropriate in other cases,” he said.

The Monterey Water Supply Project could be back in front of the commission as soon as the spring. The proposed plant in Huntington Beach is tentatively slated for consideration next summer.