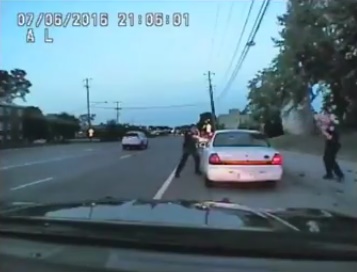 The footage captures the short interaction between Yanez and Castile, who was pulled over on July 6, 2016, for a routine traffic stop because of broken taillights.

The video, which includes audio from a microphone worn by Yanez, shows the officer approaching the car and telling Castile his brake lights are out.

Yanez then asked Castile for proof of insurance and his driver's license.

Before Castile finished that sentence, Yanez pulled his gun out of the holster. The officer said, "Okay. Don't reach for it then."

He then yelled twice at Castile, "Don't pull it out!" before shooting into the car seconds later.

After the shooting ends, Yanez is heard screaming expletives while he calls for backup.

At the end of the video, Yanez told a supervising officer that Castile's grip was "a lot wider than a wallet." He added, "I don't know where the gun was. He didn't tell me where the fucking gun was."

Castile’s killing received worldwide attention because his girlfriend, Diamond Reynolds, who was in the car with her 4-year-old daughter, live-streamed the immediate aftermath on Facebook. The dashcam video shows how quickly a simple traffic stop spiraled into a deadly incident.

On Friday, Yanez, 29, was found not guilty of one count of second-degree manslaughter and two counts of dangerous discharge of a firearm after five days of jury deliberation.

Castile, who was a cafeteria worker at J.J. Hill Montessori Magnet School in St. Paul, had a permit to carry the weapon.

Yanez’s not-guilty verdict sparked days of protests, including one on Friday that saw thousands of protesters and a shut down of I-94 for hours. Eighteen people were arrested.

The video released Tuesday by the Minnesota Bureau of Criminal Apprehension and the Ramsey County Attorney's Office was used as evidence during the investigation and Yanez’s trial.

After Yanez was acquitted, the city of St. Anthony released a statement Friday saying "the public will be best served if Officer Yanez is no longer a police officer in our city."

"The city intends to offer Officer Yanez a voluntary separation agreement to help him transition to another career other than being a St. Anthony officer," it said.