President Donald Trump's former campaign chairman, Paul Manafort, and a longtime business associate have been charged in a 12-count indictment stemming from special counsel Robert Mueller's probe into Russian interference in the 2016 election. 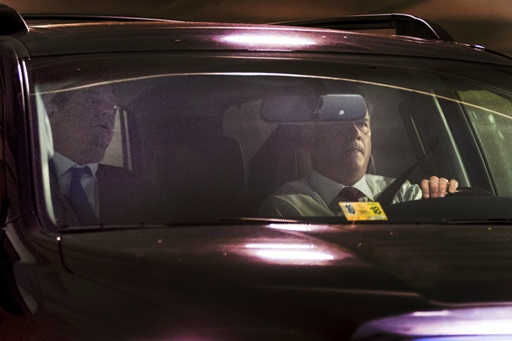 (CN) - President Donald Trump's former campaign chairman, Paul Manafort, and a longtime business associate were charged Monday in a 12-count indictment stemming from the probe of Russian interference in the 2016 election.

Both men entered pleas of not guilty. Manafort was released on $10 million bail, while Rick Gates, Manafort's business associate, was released on a $5 million unsecured appearance bond on the condition that they comply with a home confinement program and do daily check-ins by phone.

The special counsel’s office said during a hearing Monday afternoon that it considers Manafort a flight risk, citing the seriousness of the charges and the extent of Manafort’s ties abroad.  The FBI reportedly took possession of his passport on Sunday.

The indictment includes charges of conspiracy against the U.S., being an unregistered agent of a foreign principal, making false statements, money laundering and failing to pay taxes on millions earned as a lobbyist for the former Ukrainian government.

There is no mention in the 31-page document of the 2016 campaign or President Trump.

Prosecutors revealed separately on Monday that George Papadopoulos, one of the early foreign policy advisers to Mr. Trump’s presidential campaign, pleaded guilty earlier this month to lying to the FBI about his contact with a Russian professor tied to Kremlin officials.

Manafort left his Alexandria, Virginia, home early Monday morning in the company of his attorney, and surrendered to the FBI in Washington shortly after 8 a.m.

Rick Gates, a former business associate of Manafort's, was also told to surrender to federal authorities, but it was unclear by midmorning whether he had done so.

According to the indictment, Manafort and Gates worked as unregistered foreign agents for the Ukrainian government between 2006  and 2015, and ran a 10-year money-laundering scheme to hide their income.

The two are also accused of hiding the existence of the accounts, including from the government and their tax preparers.

"Manafort used his hidden overseas wealth to enjoy a lavish lifestyle in the United States, without paying taxes on that income," the indictment states. Manafort allegedly laundered $18 million, and used it to buy multimillion dollar properties in the U.S., as well as luxury goods for himself and his extended family.

"Manafort then borrowed millions of dollars in loans using these properties as collateral, thereby obtaining cash in the United States without reporting and paying taxes on the income," the document says.

It says Gates assisted Manafort in obtaining money from the offshore accounts and used money from them to pay his mortgage, pay his children's tuition and redecorate his Virginia home.

Among those watching with interest as Monday's events unfolded was attorney James Robenalt, an expert on the Watergate crisis, who is scheduled to appear in Atlanta on Monday night with former White House counsel and Watergate figure John Dean.

"I think this indictment is the one that will be the most tangential, in terms of touching the president," Robenalt said. "If this had been [former national security adviser] Michael Flynn or Jared Kushner, the charges would be directly related to the campaign."

In this case, Robenalt said, Monday's indictment appears to focus solely on "alleged crimes uncovered in the course of the Russia probe."

"This is a logical starting point," Robenalt continued. "As a prosecutor, when you're building a case, you start conservatively. Right now, I'm much more intrigued by the indictment of Richard Gates than that of Manafort because he's likely more susceptible to being flipped by the prosecution.

"That's the importance of an indictment like this," Robenalt added. "You're hoping the subject of the indictment will be willing to give up information or give up people. We'll have to wait and see on that."

Robenalt liked the situation to what occurred after Jeb Magruder was indicted in the Watergate case.

Magruder, a former high-level aide to President Richard Nixon, was indicted for lying about any involvement of the break-in at Democratic headquarters in the Watergate building. After he was charged, he was the first White House staffer to assert that Nixon himself had ordered the break-in, setting the stage for the president's resignation.

After he reading the indictment, Robenalt, a partner with Thompson Hine's Business Litigation Group, called its allegations a "shot across the bow."

"It is a warning to others that things like false reporting of lobbying will result in indictments," Robenalt said. "Others like General Flynn and Jared Kushner now need to worry they could be next. Perhaps they are already working with Flynn. But rest assured they are after bigger fish here to try to unlock what the campaign did with Russia.

"This is pressure," Robenalt continued. "And it will continue to ramp up."

Brian Galle, a law professor at Georgetown Law School, also believes the indictments announced Monday will increase pressure on Manafort and Gates to cooperate with the ongoing probe.

“It’s a common strategy used by prosecutors; [Manafort and Gates’] proceeds will be seized by the U.S. government and these gentleman and their families will be out of their fancy houses. That puts pressure on them. It’s very unlikely that they will be detained for very long and they’ll be back on the street soon. But this creates other sources of pressure on them to make a deal,” Galle said.

White House Press Secretary Sarah Huckabee Sanders downplayed the significance of the indictments while speaking to reporters on Monday afternoon, saying the filings do not implicate the president or the Trump campaign.

Instead, Sanders repeated the claim that it was the Clinton campaign that colluded with the Russian government, a common refrain among Trump's defenders after the Washington Post reported last week that the Democratic National Committee and the Clinton campaign helped fund a dossier that contained salacious allegations about Trump.

Sanders also said Trump has "no intention or plan" to fire Mueller and repeated her contention that the special counsel's investigation is nearing its completion, though she offered no evidence to back up that claim.

Sanders also downplayed Papadopoulos' involvement in the Trump campaign, saying he was nothing more than one of the "thousands" of people who volunteered on the campaign and that the advisory committee of which he was a member only met once. Sanders said the meetings he allegedly took during the campaign with people with ties to the Russian government were not official business.

"The only interaction I'm aware of that deals with this individual was him reaching out and being repeatedly denied," Sanders said. "That's all I can tell you. He asked to do things, he was basically pushed back or not responded to in any way."

"To produce a document of this kind takes a lot of work, to show details on offshore accounts with millions of dollars - in the span of a year? It's impressive on its face," he said.

Hardy said while the White House is correct in asserting the behavior leading to Manafort's indictment occurred before Trump took office, he says that's not the point.

'The real question is what else does special counsel know?" Hardy said. "In a vacuum this indictment could be the end of the trail for Manafort, whether he flips or not. This is a document written with a trial battle in mind. Manafort might ultimately be a dead end, but that doesn't tell you anything of what's to come."

President Trump weighed in on Twitter Monday, drawing a line between himself, his presidential campaign and the allegations in the indictment.

“Sorry but this is years ago, before Paul Manafort was part of the Trump campaign," the president said. "But why aren’t Crooked Hillary & the Dems the focus?”

Reaction on Capitol Hill to the indictments was swift.

Senate Minority Leader Charles Schumer, D-N.Y., warned the president not to interfere with Mueller's investigation now that it has resulted in indictments.

“The President must not, under any circumstances, interfere with the special counsel’s work in any way. If he does so, Congress must respond swiftly, unequivocally, and in a bipartisan way to ensure that the investigation continues," Schumer said in a statement.

He added that "the rule of law is paramount in America and the investigation must be allowed to proceed unimpeded."

"Months ago I & many other Republicans vowed to support Mueller investigation & allow it to work its way through process to get the facts," Banks said in a tweet on Monday.

"In light of today’s indictments we must continue to support and allow the integrity of the process to work," he added.

The indictment says Manafort spent $5.4 million for three homes, two of them in New York and one in Virginia. He also wired $4 million to a home-improvement company in the Hamptons, New York, and spent nearly $1 million on antique rugs.

Manafort also allegedly shelled out $163,000 for three Range Rovers, $1.3 million for home-entertainment and lighting systems, and $1.4 million for men’s clothing.

According to a court official at the U.S. District Court for the District of Columbia, where a grand jury has been working as part of Special Counsel Robert Mueller’s Russia probe, Manafort will be arraigned Monday at 1:30.

In other news related to the Mueller investigation, Democratic lobbyist Tony Podesta, founder of the Podesta Group, announced Monday he is stepping down from the firm after coming under the scrutiny of Mueller's investigators.

Podesta is handing over full operational and financial control to longtime firm CEO Kimberley Fritts, who will be launching a new firm in coming days with senior members of the Podesta team.

Britain Eakin contributed to this report.