The Los Angeles Housing Authority refused to investigate and clean up lead and arsenic in groundwater and soil at a Watts high school out of fear it would lose federal grants to build a public housing project nearby, Los Angeles Unified School District claims in court. 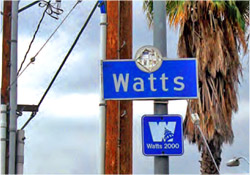 LOS ANGELES (CN) — The Los Angeles Housing Authority refused to investigate and clean up lead and arsenic in groundwater and soil at a Watts high school out of fear it would lose federal grants to build a public housing project nearby, Los Angeles Unified School District claims in court.

The toxins migrated from the contaminated industrial site of a former steel mill, the district says. In 2008, the Housing Authority acquired the factory lot for a mixed-use public housing project. Jordan High School is bordered to the west by the Jordan Downs housing project in Watts and the former site of the steel mill to the north.

The Housing Authority acquired the lot and sought federal funds to rebuild the Jordan Downs housing project and transform it into an urban village with 1,400 units and retail space for mixed-income residents.

Housing Authority spokeswoman Annie Kim called the district’s lawsuit misguided and inappropriate. She said her agency is committed to revitalizing and cleaning up Jordan Downs to make way for the housing development.

“From the beginning HACLA has consistently shared all testing data and actions being taken on the adjacent site and has recently reached out to senior executives at LAUSD multiple times for a meeting to better understand their specific concerns,” Kim said. “Those calls were not returned."

The Housing Authority entered into an agreement with the Department of Toxic Substances Control to clean up 20 acres of land on the factory lot, Kim added.

Los Angeles Unified says its environmental team detected high levels of lead and arsenic after embarking on construction projects at the school. The district removed 3,500 tons of soil close to track bleachers, a girl’s locker room, classrooms, basketball courts and the site of a wellness center.

Investigators also detected high levels of arsenic and lead in the soil north of the school’s football field and bleachers.

The Housing Authority told the school district it “was close to securing millions of federal dollars in federal grants for its housing development, and therefore, it could not open the scope of its investigation activities beyond its own property as that would put its application for grant funds at risk,” according to the 23-page complaint.

Housing Authority investigators discovered high levels of arsenic, lead, chromium and toxic contamination at the factory lot in 2010. Southwest Steel Rolling Mills operated two Electric Arc furnaces that melted scrap iron from the 1950s to the late 1970s. Buildings at the site were demolished in the 1979 and 1980.

The school district seeks at least $1 million in damages and a judicial determination that the Housing Authority caused the contamination and is responsible for the cleanup costs.

“The school site hosts young students, teachers, employees, administrators, and parents, many of whom regularly spend at least eight hours a day at the school site. The contamination migrating from the HACLA site is, therefore, of particular concern because of the exposure and risks that it poses to the school site’s sensitive population,” the lawsuit states.

Robert Laughton, the director of Environmental Health and Safety at Los Angeles Unified, said the campus is now safe.

“This environmental cost recovery lawsuit is for the recovery of cleanup expenses incurred by L.A. Unified during the construction of several new projects at Jordan High School,” Laughton said in an emailed statement. “As part of this process the Department of Toxic Substances Control has verified that the Jordan High School campus is safe. The safety of our students and staff is L.A. Unified’s top priority.”