Jurisdiction Debated in Fight of Okinawa Military Base

Environmental groups told a federal judge Thursday that in order to justify forging ahead with a new military base on Okinawa, the Department of Defense did a cursory job of evaluating effects on the endangered Okinawa dugong. 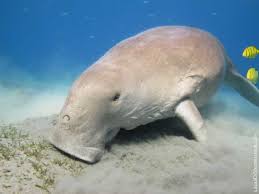 SAN FRANCISCO (CN) – Environmental groups told a federal judge Thursday that in order to justify forging ahead with a new military base on Okinawa, the Department of Defense did a cursory job of evaluating effects on the endangered Okinawa dugong.

Earthjustice lawyer Sarah Burt said the Pentagon did not consult native Okinawans or the Okinawa prefectural government about the base’s potential harm to dugong populations that feed in the area, or about how the loss of habitat might impact Okinawan cultural practices.

“The affected communities are the traditional communities that hold the cultural beliefs and spiritual practices surrounding the dugong and they were not consulted in this case,” Burt told U.S. District Judge Edward Chen at Thursday’s hearing to determine whether an environmental challenge to the base can move forward.

Burt said the department is required under the National Historic Preservation Act to consult with the Okinawan government and affected communities, but instead hired contractors to speak with the Japanese government and outside academics.

The fight to protect the Okinawa dugong, a sacred Sirenian species of marine mammal in Okinawa, dates back 15 years, when conservationists led by the Center for Biological Diversity sued the federal government over the relocation of the U.S. Marine Corps Air Station Futenma from Ginowan City, Okinawa, to an offshore location near Camp Schwab next to Henoko and Oura bays.

Though U.S. District Judge Marilyn Hall Patel in 2008 awarded summary judgment to the plaintiffs, the court administratively closed the case due to uncertainties about the project’s future. In August 2014, the case was reopened and assigned to Chen after Patel retired.

Okinawa’s strategic location, 400 miles off the coast of China, makes it ideal for responding to Chinese military threats in the region. The island has been crucial to U.S. campaigns since World War II, including the conflicts in Korea, Vietnam, Iraq and Afghanistan.

This planned relocation was done in conjunction with the Japanese government under an agreement reached in 2006. Joined by the Turtle Island Restoration Network, Japan Environmental Lawyers Federation and Save the Dugong Foundation, the Center for Biological Diversity claims construction plans include two 1,600-meter runways built on landfill that may destroy seagrass beds on which the dugongs feed.

Okinawa dugongs have smooth, dark gray or bronze skin, fluked tails and downturned muzzles with stiff, whisker-like bristles they use to dig up seagrasses, their primary food source. They grow up to 9 feet long, weigh 550 to 1,000 pounds, and can live for up to 70 years.

Dugongs were listed as endangered under the U.S. Endangered Species Act in 1972 and are considered critically endangered in Japan.

“The Department of Defense concedes that the area is habitat for the dugong,” Burt said. “Habitat loss and coastal development are key drivers of its endangerment. So to remove even more of the dugong’s habitat of its range, and they are talking about filling in 200 acres of seagrass beds, that is significant to the species.”

Chen first dismissed the case in 2015, ruling the plaintiffs’ request for an injunction raised political questions the court lacked the authority to hear. At the time, Chen seemed fatalistic about the base’s construction and the court’s inability to offer the plaintiffs any effective relief.

“After decades of negotiations, the American and Japanese governments have made a final and (apparently) irreversible decision to construct the challenged military base, and as suggested above, this court lacks the power to enjoin or otherwise alter that decision,” he wrote in 2015.

But last year, the Ninth Circuit ruled the plaintiffs have standing to seek declaratory and injunctive relief over the base, and that neither set of claims present political questions that prohibit judicial review.

On Thursday, he again expressed concern about diplomatic relations with Japan.

“We’re dealing in the realm of international relations and there are diplomatic concerns about mandating certain things,” Chen said, more than once lamenting the lack of guidance within the statute as to who should be afforded consulting status.

Still, Chen seemed open to hearing from local cultural practitioners regarding anything the Department of Defense’s finding of no adverse impact might have left out or ignored.

He also asked the government why it didn’t at least give the environmental groups a notice and comment period. Surely that wouldn’t offend America’s strategic partners, he suggested.

“Is it arbitrary and capricious to not even be told about the process?” Chen asked Justice Department attorney Mark Haag.

“That does rub up against the strategic relationship with the sovereign government of Japan, which had already undertaken a notice and comment process,” Haag said, adding “it could cause some diplomatic problems.”

Chen pressed: “How would a Department of Defense notice and comment cause it?”

Haag replied, “Let’s flip the scenario. See how it strikes you if a Japanese court were to order that Japan was obligated to come on U.S. soil to conduct a notice and comment process that the U.S. government objected to. I’m not saying they objected to that, but I’m saying the process reflected in the record today was coordinated very closely with Japan.”

Also, Haag added, the government isn’t even required to give the plaintiffs notice or seek their input, especially since some of the individual plaintiffs are Japanese.

Chen said he would take the arguments under submission.

“I need to consult the record a little more,” he said. “There’s not a whole lot of specific guidance in the statute.”