A Libyan man charged with aiding the 2012 incursion on the U.S. embassy in Benghazi was sentenced Thursday to 19 and a half years in prison for his role in the fiery attack that left four Americans dead. 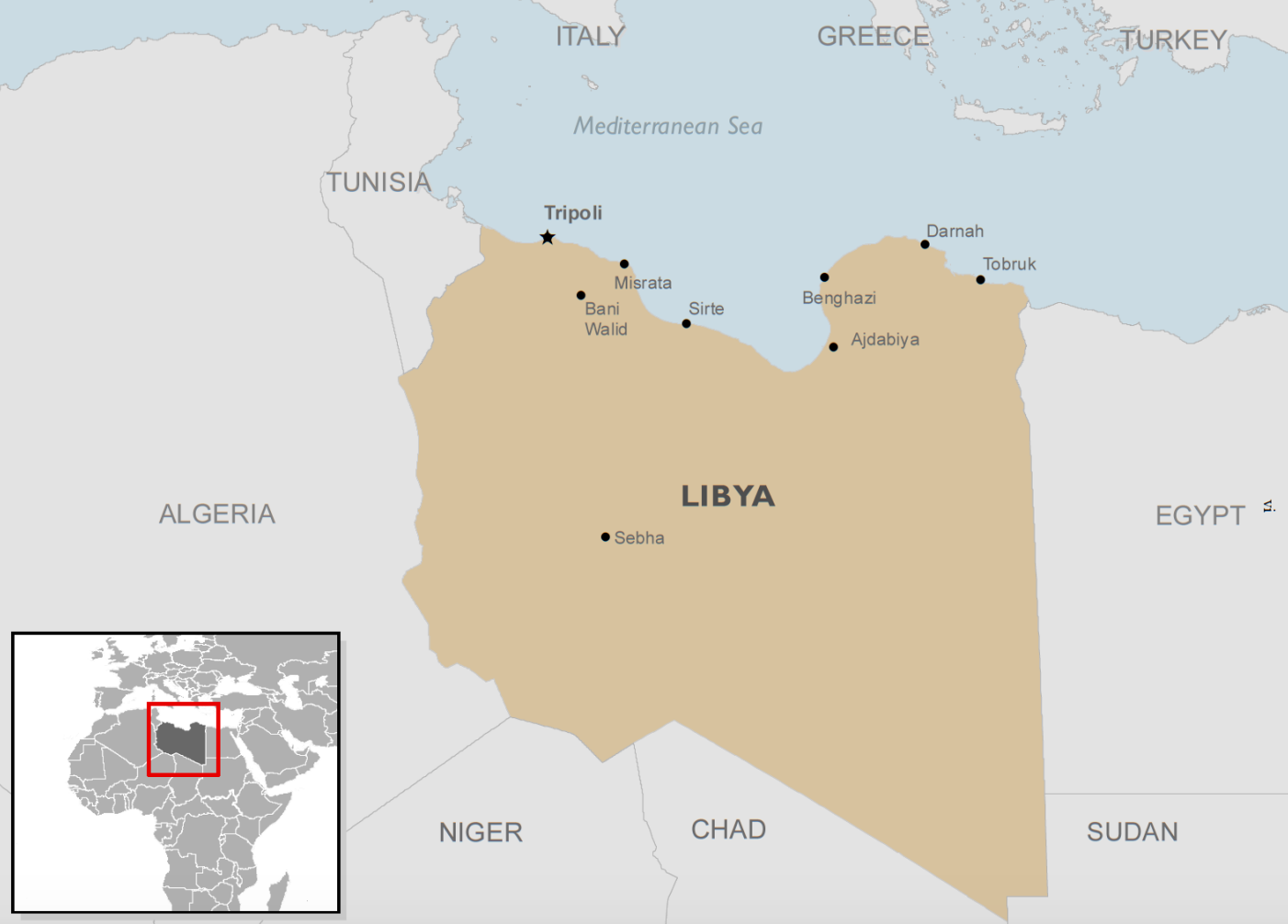 WASHINGTON (CN) — A Libyan man charged with aiding the 2012 incursion on the U.S. embassy in Benghazi was sentenced Thursday to 19 and a half years in prison for his role in the fiery attack that left four Americans dead.

The sentence fell far below the maximum 35 years imprisonment recommended by federal prosecutors. Mustafa Al-Imam, 47, stood wearing an orange jumpsuit as U.S. District Judge Christopher Cooper read aloud the sentence, with the families of victims, and one survivor of the attack, seated in the courtroom.

The case is only the second brought by the Department of Justice in the seven years since the shocking attack that fueled political backlash.

Alluding to protesters who last month broke into the heavily fortified U.S. embassy compound in Baghdad, Iraq, the judge focused on the need to send a message abroad that attacks on Americans will not go unpunished.

“These folks are very exposed and very vulnerable targets, as recent events have shown. Anyone contemplating hurting them will have to face strict consequences,” Cooper said.

A federal jury found Al-Imam guilty last year of supporting terrorism and damaging U.S. property, but failed to reach a verdict on whether he was responsible for the death of U.S. Ambassador J. Christopher Stevens, State Department officer Sean Smith and two CIA security contractors, Glen Doherty and Tyron Woods.

Video footage from the night of the Sept. 11, 2012 attack, showing buildings consumed by flames, captured Al-Imam carrying out maps and other documents containing sensitive information that the government argues were seized for the purpose of planning additional attacks on U.S. personnel.

Praising the government for its professionalism in the case, Cooper also thanked the family members of victims who testified to the pain of losing their loved ones and their desire to see justice carried out.

“It’s unfortunate that the politics of Benghazi has overshadowed the very real suffering that the victims and families have experienced and will continue to experience as a result of the events of Sep. 11, 2012,” the judge said.

In 2018, Cooper also sentenced militant leader Ahmed Abu Khattala to 22 years for his involvement in the Benghazi attack, disappointing federal prosecutors who pushed for a life sentence.

On Thursday, Cooper said he came to that decision reluctantly. The jury in that case at the end of a seven-week trial also failed to convict the Libyan defendant on the more serious charges brought against him, including the murder of U.S. officials.

The judge made clear that both Abu Khattala and Al-Imam had the right to a fair trial in the U.S. But with Abu Khattala’s sentence now appealed to the D.C. Circuit, Cooper said he would “not lose sleep imposing a different sentence.”

Assistant U.S. Attorney John Cummings had urged Cooper to hold Al-Imam accountable for what he said was not just an attack on the diplomatic facility but a deliberate plot to maximize pain and humiliation for the U.S.

“This was an attack directed at the United States, at each and every one of us,” Cummings said.

When sentencing Abu Khattala, Cooper said the militant struck him as capable of ordering acts of violence but not a “stone-cold terrorist, as the government made you out to be,” while adding that he also did not believe the defendant to be an innocent bystander in the attack.

The judge expressed similar reservations to the Justice Department’s picture of Al-Imam as a central figure in the Benghazi attack, saying the evidence suggests he was more of a follower than a leader.

“You do strike me as a pretty simple guy, focused on taking care of your wife and your family. You did not fight in the revolution,” the judge told Al-Imam, adding that he appeared to be an easily influenced person who had, for whatever reason, fallen in line behind Abu Khattala.

“Let me be clear,” the judge said, “this is not a case of association.” Cooper told Al-Imam that he made the decision to get into a car with members of Al-Imam’s militia that night.

“Certainly when you arrived at the mission and saw what was happening, you were faced with a choice,” Cooper said.

Cummings had called on the judge to send a message with a maximum sentence to militants abroad that targeting the U.S. will not go unpunished. But Matthew Peed, an attorney for Al-Imam with the firm Clinton Peed, warned the judge of the reception of such a decision in countries like Libya.

“A maximum sentence will lead to feelings of resentment that [are the] genesis [of] terrorism,” Peed warned.

Gary Doherty, the brother of Glen Doherty, on behalf of all the victims’ families implored Cooper to sentence Al-Imam to 35 years. Doherty said he felt compassion for Al-Imam, who listened through headphones as an interpreter softy translated the proceedings into Arabic.

“However, these are important life and death decisions that he made and the consequences matter for our family and for the nation,” Doherty said.

The brother-in-law of Ambassador Stevens, Peter Sullivan, said based on the evidence that it seemed Al-Imam ran with a dangerous crowd. Admitting he lacked an understanding of the complicated sentencing guidelines discussed at length during the hearing, Sullivan added: “But I do know that it takes a team to pull something off like that.”

But Peed argued that Al-Imam was caught up in the complicated social network of post-revolution Libya in 2012.

“There is not a clear line between terrorist and average people in Benghazi. There are multiple groups, multiple ideologies,” Peed said, adding that even the government’s witnesses had close ties to the militant leader Abu Khattala.

Rejecting that his client was a hardened extremist, Peed said Al-Imam looked slouched over, uncomfortable, in a photo exhibited by the government of him holding an AK-47. The assault rifle, Peed noted, is commonplace in Libya, often shot off in celebration at weddings.

The attorney said he wanted justice for families of the victims, but that Al-Imam was not a member of Abu Khattala’s inner-circle and that those who were in the extremist militia should be held accountable for the embassy attack.

Peed was the only person to speak for Al-Imam, who chose not to address the court Thursday, in a proceeding that typically includes statements from family and friends of the defendant.

Letters submitted to the court by Al-Imam’s wife, three sisters, brother, brother-in-law, cousin, as well as friends and neighbors in Libya were considered by Cooper prior to the sentencing.

Both Sullivan and Doherty declined to comment after the sentencing. But Barbara Doherty, the mother of Glen Doherty, said the federal prosecutors did a wonderful job handling the case.

“Thank you for all your hard work,” she told Cummings as he left the well of the courtroom, and hugged the prosecutor.

Meanwhile, Peed said the sentencing Thursday was not the end of the road for Al-Imam.

“It was based on considerations that the jury did not find and we look forward to an appeal,” the attorney said.

The Justice Department said in a statement following the sentencing that the U.S. will not forget the lives lost in the violent attack.

“While nothing will ever change the outcome of this horrific event,” FBI Assistant Director William Sweeney Jr. said, “today’s sentencing is a reminder that the safety of Americans — whether at home or abroad, civilian or otherwise — will always be our top priority. If you commit an act of terrorism, we will find you and bring you to justice."