With less than two weeks to go before he appears before the Senate Judiciary Committee for a hearing on his nomination to the Supreme Court, the American Bar Association on Thursday gave 10th Circuit Judge Neil Gorsuch its highest possible rating. 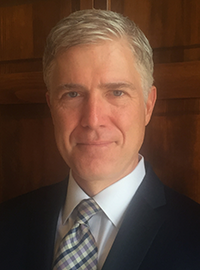 WASHINGTON (CN) - With less than two weeks to go before he appears before the Senate Judiciary Committee for a hearing on his nomination to the Supreme Court, the American Bar Association on Thursday gave 10th Circuit Judge Neil Gorsuch its highest possible rating.

The "well qualified" rating was the result of hundreds of interviews with people who know Gorsuch's qualifications and a close examination of his legal writing. It is based solely on the ABA Standing Committee on the Federal Judiciary's assessment of Gorsuch's "integrity, professional competence and judicial temperament," according to an ABA press release.

"The ABA's ringing endorsement is no surprise given Judge Gorsuch's sterling credentials and his distinguished decade-long record on the Tenth Circuit," Senate Judiciary Chairman Chuck Grassley, R-Iowa, said in a statement. "Former Chairman [Sen. Patrick] Leahy and [Senate] Minority Leader [Chuck] Schumer have called the ABA's assessment the 'gold standard’ in evaluating federal judicial nominations. In light of Judge Gorsuch's impeccable record, it's hard to imagine any other result from the ABA's consideration."

The rating announcement came shortly after the Senate Judiciary Committee posted more than 144,000 pages of records it received Wednesday that detail Gorsuch's time at the Justice Department. The department withheld an additional 3,000 pages of documents it said were protected as well as others that it classified as attorney work product.

An initial review of the first part of the massive release, which covers Gorsuch's tenure as principal deputy to the associate attorney general from 2005 to 2006, consists mostly of news clippings and reports for Gorsuch to review. These include a report on the United States' treatment of detainees held at Guantanamo Bay and another on its efforts to fight sex trafficking.

Most of the emails in the production are fairly mundane, with Gorsuch and other employees discussing messaging and coordinating events and responses to topics in the news.

But some show Gorsuch's limited involvement in several controversial Bush-era policy fights, such as the treatment of detainees and revelations about government surveillance programs.

In some emails, Gorsuch and his colleagues monitor and discuss an amendment to a 2005 defense authorization bill offered by Sen. Lindsey Graham, R-S.C., that cut down on the ways detainees held at Guantanamo Bay could challenge their detention. A pared-down version of Graham's amendment was included in the bill.

In addition to the lengthy document dump, the Department of Justice also responded to a letter from Sen. Dianne Feinstein, D-Calif., looking for Gorsuch's work on several high-profile cases involving detainees, their treatment and the Bush Administration's use of surveillance during the War on Terror.

Most of Gorsuch's involvement in the 10 cases about which Feinstein asked were limited to monitoring developments, but he helped develop case strategy and reviewed briefs in others, such as Doe v. Gonzales, a challenge to the Patriot Act that was decided by the Second Circuit while Gorsuch was with the Justice Department.

The DOJ’s letter to Feinstein also details various task forces Gorsuch served on while at the department, including one on human trafficking and another on immigration courts and the Board of Immigration Appeals.

Gorsuch was also involved in creating the DOJ’s Office on Privacy and Civil Liberty Issues, according to the letter, and helped with Operation Home Sweet Home, a department program that tried to identify housing discrimination.

In one email from the 144,000 pages handed to the Senate Judiciary Committee, Gorsuch asks a colleague if it would be possible to double the all-time high of tests performed under the program.

"I think we should at least explore it," Gorsuch said in an email sent Jan. 12, 2006. "Not sure how doubling from existing level will look when someone compares it to prior highs."