A Kentucky Fried Chicken manager raped a 16-year-old employee dozens of times at his restaurant, one time next to a Dumpster, the woman, now 19, claims in court. 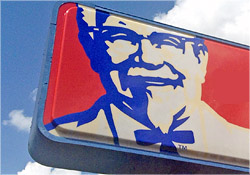 HOUSTON (CN) — A Kentucky Fried Chicken manager raped a 16-year-old employee dozens of times at his restaurant, one time next to a Dumpster, the woman, now 19, claims in court.

A.M. claims in Harris County Court that KFC manager Sean McIntosh raped and sodomized her repeatedly "at hotels, at the KFC store, at the trash Dumpster, in cars and at other off-site locations.”

She sued McIntosh, KFC Corp. and other KFC managers on Nov. 28, and amended the complaint on Dec. 2.

McIntosh and other managers “were essentially operating a sex brothel that abused females while serving KFC chicken and Yum! brand food to the public,” A.M. says in the amended complaint.

Representatives for KFC did not respond to requests for comment.

A.M. claims that McIntosh “made no secret of his sex acts with A.M. He told other KFC managers of his despicable conduct and reached an agreement with them that they would keep silent about his offensive conduct and in exchange he would continue to protect their sexual misconduct. … Such silence also permitted other managers to have sex with other minors and females on the premises.”

A.M. says that defendant manager Shawn Baker “in particular was actually told of the predation on A.M. and did nothing to stop it,” but aided and abetted” it.

She says McIntosh “was so confident that he would suffer no repercussions for his disclosed sexual activities that he did nothing to hide his predatory appetite from anyone.”

McIntosh demonstrated his “insatiable sexual practices” by posting explicit statements and a video of another woman on social media, A.M. says in the amended petition. Seven of those explicit postings are cited in the amended complaint.

A.M. said in the original complaint that McIntosh has explicit photographs of her, and may have posted them online. She says she informed Baker and co-defendant manager Jane Doe of the assaults, but they “refused to intervene or report the abuse.”

A.M. filed a report with the Houston Police Department on Nov. 26 and has filed criminal charges against McIntosh, her attorney Benjamin Hall III said in an interview Monday.

Hall’s law firm obtained a $7.6 million judgment against Chipotle for similar charges in September, Houston digital TV station CW39 reported. The Chipotle manager is believed to have fled the country.

“The conduct at KFC is in many ways more reprehensible than the disgusting conduct unearthed at Chipotle,” Hall told CW39. “There appears to have been no reluctance at all or shame among the KFC managers to victimize these children.”

CW39 is a subsidiary of Tribune Broadcasting, according to publicly available information.

A.M. seeks $10.6 million in punitive damages against Yum! Brand Foods, KFC Corp. and KFC Properties for reckless abuse and assault of a child, assault and battery of a child, defamation of a child, invasion of privacy, premises liability and gross negligence.

She also seeks a temporary restraining order to prevent McIntosh from coming near her or sharing explicit photographs of her. A hearing has been set for Dec. 9 in the 113th District Court in Harris County.