A federal judge indicated Thursday he will advance conservation groups’ claims that a proposed 43-mile groundwater pipeline in a Southern California desert was approved abruptly and without proper environmental review by a federal agency. 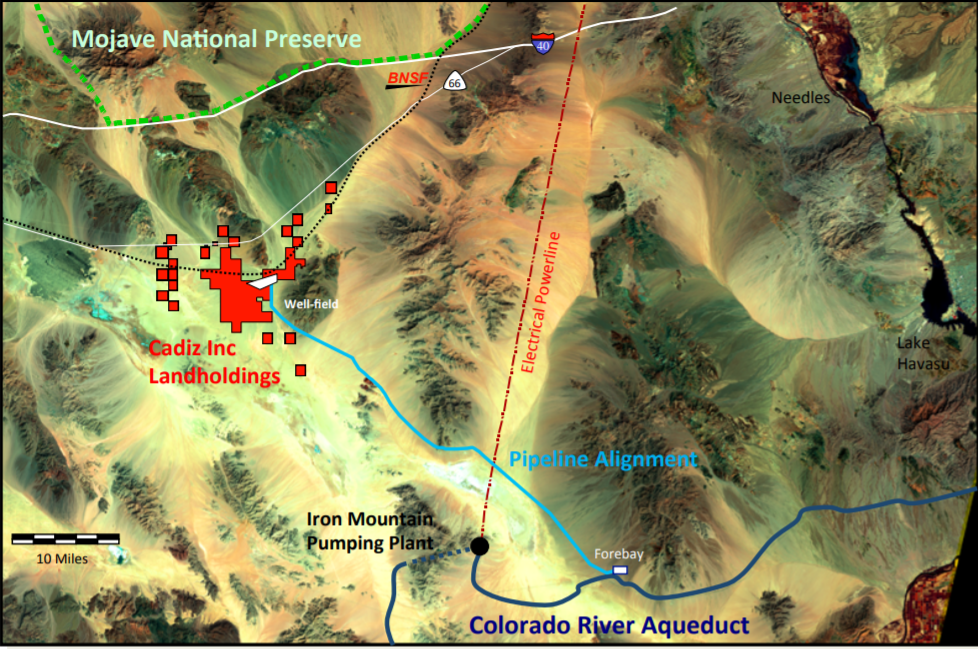 LOS ANGELES (CN) – A federal judge indicated Thursday he will advance conservation groups’ claims that a proposed 43-mile groundwater pipeline in a Southern California desert was approved abruptly and without proper environmental review by a federal agency.

The Cadiz groundwater pipeline project would move nearly 45 million gallons of water daily for 50 years from an underground aquifer in the Mojave Desert and to cities across Southern California.

The Center for Biological Diversity and Center for Food Safety accuse Cadiz of trying to evade federal laws protecting the fragile desert by planning to build its pipeline along a railroad track that was established under the General Railroad Right-of-Way Act of 1875.

In a 2015 memo, the Obama administration’s Bureau of Land Management said the pipeline is beyond the scope of the 1875 act easement and found “no relationship between the express purpose for the pipeline and the railroad’s operation.”

But under the Trump administration, the federal agency reversed course in a 2017 superseding memo stating the 1875 act applies because the pipeline wouldn’t “‘interfere’ with the railroad, or because it will ‘further a railroad purpose.’”

The government moved for summary judgment, arguing its new interpretation of the 1875 law means Cadiz doesn’t require a federal right-of-way permit or need to prepare an environmental review of the pipeline.

But U.S. District Judge George Wu disagreed during a hearing in Los Angeles on Thursday, tentatively denying summary judgment. He said the federal agency’s 2017 interpretation was “incredibly broad” and undefined.

“That interpretation would allow railroad companies to put up 284-foot wind turbines along tracks,” Wu said. “Or if they wanted, trash dumps or even radioactive waste.”

A spokesperson for the Bureau of Land Management said the agency does not comment on pending litigation.

Arguing for the government, attorney Luther Hajek told Wu that while the BLM’s interpretation is broad, what is important is the “individual application” of the policy.

Hajek said the 2017 analysis found Cadiz’s pipeline “will further a railroad purpose,” such as supplying water to fire hydrants along the track, generating power through turbines and washing rail cars.

Citing the BLM’s 2015 memo, however, the conservation groups’ attorney Gregory Loarie said the agency found hydrants “do not derive from or further a railroad purpose,” and that only 0.02% of pipeline water was intended for the railroad.

In their opposition to summary judgment, the conservation groups said BLM failed in its duty to provide a “‘detailed justification’ for disregarding its prior findings,” including a 2015 determination that the pipeline was unnecessary for rail operations.

Cadiz attorney Lawrence Jensen of the firm Brownstein Hyatt disagreed with the tentative ruling and told Wu he needed to the full record that BLM relied on for its determinations, including 500 pages of analysis on why the 2015 memo should be reversed.

Wu said he could only review the documents submitted by both parties but added the undisputed facts were the same in 2017 as they were in 2015.

Jenson pressed Wu to review additional records since it would explain BLM’s shift in its “understanding of the law.”

University of California, Irvine, professor Michael Robinson-Dorn – an attorney for the National Parks Conservation Association, a plaintiff in a matter consolidated with this case – told Wu that to avoid repeating Thursday’s arguments in the future, the court should vacate the 2017 BLM memos since they’re “contrary to law.”

In a 48-page written ruling issued Friday, Wu found the BLM’s 2017 determination memo ran afoul of the Administrative Procedure Act and failed to explain why it was reversing the 2015 memo. He ordered the agency to reconsider.

“In sum, the court would hold that the BLM had the duty to provide a reasoned explanation for why it disregarded certain facts from the 2015 determination in its conclusion that the component parts of the Cadiz Pipeline furthered railroad purposes. Because the 2017 determination provided no explanation for reversal, the court would find it arbitrary and capricious,” Wu wrote.

“We’re grateful the court decision will stop the Trump administration’s blatant attempt to do a favor for their corporate friends. The court found that the reversal of Obama-era policies was unjustified and unexplained,” said Lisa Belenky, a senior attorney with the Center for Biological Diversity. “This massive water-privatization scheme is not sustainable. Cadiz will devastate the entire Mojave Desert ecosystem that relies on that water for survival.”