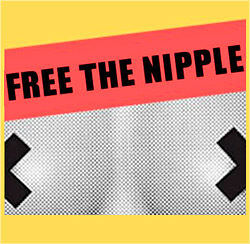 Free the Nipple sued the city of 161,000 in May 2016, challenging its ordinance No. 134, which banned girls and women older than nine from exposing their breasts in public unless they were breastfeeding.

“The Equal Protection Clause of the Fourteenth Amendment bars state governmental entities from discriminating between the sexes unless they have an ‘exceedingly persuasive justification’ for doing so,” the order states.

“In this case, Fort Collins has on the books an ordinance that on its face discriminates against women.”

Fort Collins passed Ordinance No. 134 in November 2015. Free the Nipple — a movement that started from a 2012 film of the same name — then staged protests throughout the city, gathering topless in public spots, save for tape over their breasts and nipples.

Jackson found that Fort Collins’ justifications for the ordinance “little more than speculation.”

“During the hearing defendant called Assistant Police Chief Jerome Schager, who testified that topless females in public likely might cause distracted driving and traffic issues that disrupt public order,” the order states.

“There are many things that could potentially distract drivers and disrupt traffic, but the constitutional issue is whether there is such a threat to public order that it rises to the level of an important government interest. Frankly, without any significant evidence on this point, I’m skeptical that it does.

“Rather, it appears that underlying Fort Collins’s belief that topless females are uniquely disruptive of public order is the same negative stereotype about female breasts that I discuss in more depth later — namely, that society considers female breasts primarily as objects of sexual desire whereas male breasts are not.

“Nor has Fort Collins provided any meaningful evidence that the mere sight of a female breast endangers children. The female breast, after all, is one of the first things a child sees,” Jackson wrote.

The only other Colorado city to sanction a woman’s right to go topless in public is Boulder, between Fort Collins and Denver.