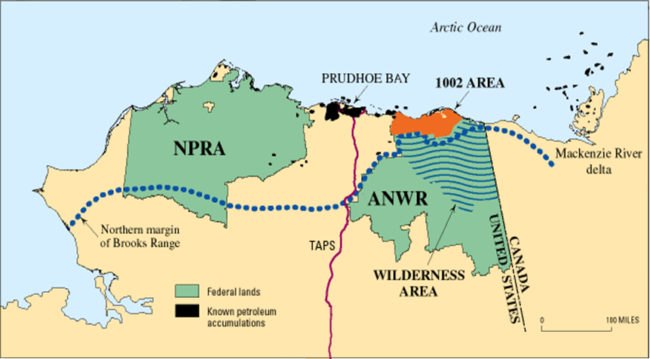 The suits challenge the Trump administration’s offering of more than 10 million acres of land in the Western Arctic Reserve at the 2017 lease sale on Dec. 6, 2017. Held by sealed bid and Livestream, the largest lease sale to date included 900 tracts within the 22.8 million-acre National Petroleum Reserve, encompassing all the tracts designated as available for development in the 2013 Record of Decision for the Integrated Activity Plan and Environmental Impact Statement for the NPR-A.

The Interior’s Bureau of Land Management said when it announced the sale in October that it was keeping with the administration’s goal of achieving American energy dominance and replenishing the Trans-Alaska Pipeline System.

“In May, I put my hand on [the pipeline] and pledged to help fill it by putting Alaskans back to work on the North Slope. This large and unprecedented sale in Alaska will help achieve our goal of American Energy Dominance,” Secretary of the Interior Ryan Zinke said in October.

“Responsible development of petroleum resources in Alaska means creating good-paying local jobs and revenue for the communities while protecting vital subsistence resources that Alaska Native communities depend on,” he added.

Trustees of Alaska attorneys representing the Northern Alaska Environmental Center, the Alaska Wilderness League, the Defenders of Wildlife, the Sierra Club and the Wilderness Society Alaska, argue in their suit against Zinke and BLM director Brian Steed that the offering fails to take a closer look at the negative impacts of future development on fish, wildlife, subsistence and habitat in the reserve.

They also question the economics of drilling in the Arctic, as BLM only sold about 80,000 acres out of 10 million at the sale. Even so, the lawsuit is not about the size of the sale, but rather BLM’s failure to honor its obligation under the National Environmental Policy Act to address environmental impacts and prohibit activities that case harm.

“The current management plan for the National Petroleum Reserve-Alaska was built on a foundation of broad public input, and it recognized special areas of critical importance that must be protected,” conservation director at the Alaska Wilderness League, Kristen Miller, said in a statement.

“Donald Trump has made clear that no inch of America’s Arctic should be left off-limits to development,” Miller said. “We see it in the Reserve. We see it in his administration’s offshore plant that opens the entire Arctic Ocean to drilling. And we see it in his tag-team push with Congressional leadership to open up the Arctic National Wildlife Refuge.”

Alli Harvey of the Sierra Club added that, “We cannot afford to drill first and ask questions later. The Western Arctic is on the front edge of the devastating consequences of a warming climate. The impacts of ill-conceived decisions now will have long-term ramifications for people who rely on these landscapes, the American public and wildlife.”

“The Trump Administration is in such a rush to sell off our public lands to the oil and gas industry that it isn’t even taking the time to comply with the law,” Trustees for Alaska staff attorney Suzanne Bostrom said in a statement.

In a separate but similar suit filed that same day, Earthjustice attorneys challenged the lease sales on behalf of the Natural Resources Defense Council, Greenpeace, the Center for Biological Diversity and Friends of the Earth, in the U.S. District Court in Anchorage. They sued BLM, Zinke and Karen Mouritsen, acting Alaska state director for BLM.

“The Indiana-sized, largely wild and undeveloped territory is globally regarded as an ecological treasure,” the 20-page complaint states. It further highlights that iconic Arctic species such as grizzly bears, musk oxen, caribou and millions of migratory birds that fly to all 50 states and five continents rely upon Reserve lands for survival and two caribou herds – the Western Arctic and Teshekpuk – provide vital subsistence resources to more than 40 communities in northern and western Alaska.

Earthjustice also maintains the December lease sale violated federal obligations under NEPA to conduct a new Environmental Impact Statement. “In forgoing the NEPA analysis at the lease sale state in 2016 and 2017 BLM acted arbitrarily and capriciously and not in accordance with law and violated NEPA in at least two key respects,” the complaint states.

According to court documents, BLM failed to take a hard look at the effects of the lease sales on greenhouse gas emissions and climate change, and it failed to develop and compare a reasonable range of lease sale alternatives.

“Climate change is affecting the Reserve, and oil and gas drilling in the Reserve will, in turn, affect the climate,” the complaint asserts.

“Alaska has warmed more than twice as rapidly as the rest of the United States over the past 60 years, and the Arctic is expected to warm by an additional 10°F to 12°F,” it continues. “This rapid warming presents myriad disruptions to Arctic ecosystems, including in the Reserve.”

Currently 189 authorized leases occupy the NPR-A, covering more than 1.3 million acres. BLM conducted 12 lease sales in the reserve prior to the December sale at issue in the lawsuit. Bids received for those sales generated more than $280 million, half of which was paid to the State of Alaska.

President Warren Harding created the reserve in 1923 as a source of oil for the Navy. The Department of the Interior took over management from the Navy in the 1970s, and the area was left largely as wilderness until the 1990s, according to Bureau of Land Management documents.