Deal May Be Near in Fight Over Billionaire’s Art Forgeries

A bizarre, six-year saga involving a billionaire real estate developer who made illegal copies of two sculptors’ works may be close to ending. 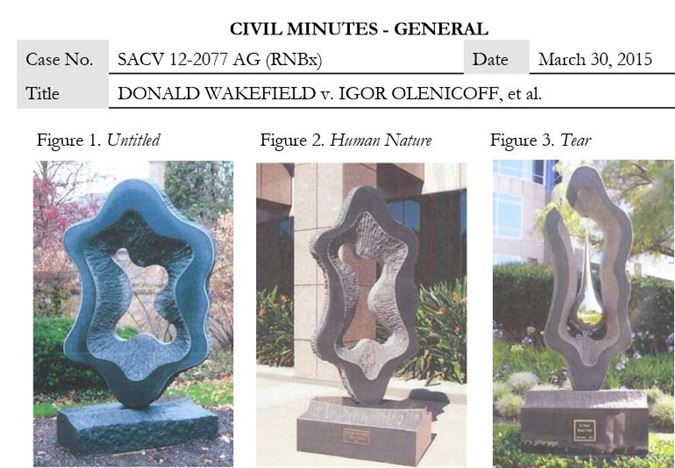 At a hearing Monday, an attorney for developer Igor Olenicoff and his Olen Properties Corp. said his clients are close to settling lawsuits against them by artist Donald Wakefield.

Wakefield claims the defendants had several copies of one of his large, concrete works manufactured in China without permission or notice, which they then displayed outside some Olen Properties buildings.

The announcement came at the start of a hearing to consider Wakefield’s unusual motion for severe sanctions against Olenicoff, whom Wakefield claims concealed an additional infringing copy throughout the years of litigation, trial, verdict and appeal.

“The Olen parties brazenly and repeatedly perjured themselves regarding the breadth of their infringement, which has resulted in Wakefield having to file an entirely new lawsuit against them,” plaintiff’s attorneys Eugene J. Brockland of Herzog Crebs in St. Louis and Michael D. Kuznetsky of Los Angeles wrote in their sanctions motion.

Wakefield first sued the Florida-based billionaire on copyright violations in 2012, after discovering four copies and three modified copies of his large, concrete statue “Untitled” at three Olen Properties developments in Orange County, California. Wakefield said he and a colleague had made just one version of the piece in 1992 and had given it to the colleague’s son in Illinois.

Forbes magazine currently estimates the Russian-born Olenicoff is worth $4.2 billion. It notes he pleaded guilty to tax evasion in 2007. He served two years’ probation and paid $52 million in back taxes.

In the artists’ lawsuits, Olenicoff eventually conceded the infringements and went to trial on damages. A jury awarded Wakefield $450,000 in June 2014, while a second jury awarded Raimondi $640,000 in August 2015.

Raimondi’s case settled on appeal, according to a newspaper account. The Ninth Circuit upheld Wakefield’s award this past March.

But in a bizarre twist, Wakefield stumbled on yet another copy of “Untitled” at another Olen Properties in Irvine, California. He found this eighth copy – what his sanctions motion calls the “last copy” – in September 2014, just three months after the verdict in his lawsuit.

So this past July, he filed a second copyright infringement lawsuit against Olenicoff and Olen Properties. And in December, he moved for “comprehensive and meaningful sanctions,” including attorneys’ fees, a judgment holding the defendants liable in the new lawsuit and an order for “additional meaningful relief to ensure once and for all that the Olen parties are not concealing even more infringement.”

In unusually strong language, the sanctions motion says Olenicoff and his company lied by not disclosing the eighth copy of the sculpture.

“There is no sugar-coating what the Olen parties did. It was not mere forgetfulness or lack of diligence. They perjured themselves. On multiple occasions,” Wakefield’s motion states.

The Florida-based billionaire explained in a declaration responding to the motion that he “merely forgot” about the additional copy. Asked during a deposition how many copies his company purchased, he said, “I honestly don’t recall. Three, four. Something like that.”

But in his response to the motion, Olenicoff and his company fired back with strong language of their own.

Arguing that there has been no discovery or any other proceedings in Wakefield’s new lawsuit over the “last copy,” they complain that the artist is “is requesting this court skip the hassle of due process and civil procedure … based solely upon the highly inflammatory conclusions of counsel for Wakefield.”

During Monday’s short hearing, Guilford suggested problems exist on both sides. He said he couldn’t imagine having so much art that he’d forget about some of it.

He also told Wakefield’s attorney Kuznetsky that he is “not satisfied that these cases have been prosecuted sufficiently,” mentioning discovery as one example.

The judge continued the hearing until Feb. 5 or when the case is settled. “There are things about this case I just don’t understand,” Guilford said.