A defunct profit-seeking college chain and its owner must pay $22 million for defrauding the federal government and submitting false information to get federal aid for unqualified students, federal prosecutors said. The owner also has been sentenced to prison. 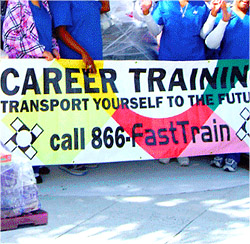 MIAMI (CN) — A defunct profit-seeking college chain and its owner must pay $22 million for defrauding the federal government and submitting false information to get federal aid for unqualified students, federal prosecutors said. The owner also has been sentenced to prison.

“FastTrain’s business model is to enroll as many students as possible in order to become the beneficiary of more federal funding,” according to the United States’ original complaint of April 17, 2012.

FastTrain “encourag(ed) students to lie on their individual loan applications in order to appear to be more attractive loan candidates,” the complaint states. It continues: “FastTrain then intentionally submits numerous false individual claims to the government via student loan applications. For example, FastTrain has its students falsely represent that they graduated high school. FastTrain also completes loan paperwork on behalf of illiterate students, and unlawfully assumes these students’ identities when signing on their behalf. FastTrain submits these false applications to game the system, with which it is very

familiar, to have students appear to be eligible, or more attractive loan candidates to obtain Pell Grants and other assistance. Through these practices, FastTrain is committing a fraud on the government.”

U.S. District Judge Marcia Cooke entered final judgment of $22 million on Feb. 15: more than $12 million in damages and $10 million in penalties. Amor and FastTrain received improper funding from Pell Grants, the Federal Direct Loan Program, the Federal Family Education Loan Program, and the Campus Based Programs, the Department of Justice said in a statement this week.

The United States also accused Amor of criminal charges. A jury in November 2015 convicted him of conspiracy to steal government funds and 12 counts of theft of government. He was sentenced to 97 months in prison.

“The student victims in this case were especially vulnerable,” Judge Cooke ruled. “They were young people who, for whatever reasons, had not graduated high school. Realizing there are few jobs one can obtain without a high-school diploma or equivalent degree, they turned to FastTrain, hoping to learn marketable skills to improve their chances of making a decent living. FastTrain aggressively recruited these students, and then used fraud to make the government think they were eligible for federal aid and loans.”

The ruling continued: “FastTrain bilked the Government out of millions of dollars, most of which ended up in [Alejandro] Amor’s pockets. As for the student victims, many now carry debt that will be enormously difficult to pay off with what they can earn working the low-level jobs for which they are qualified. The effects of Amor’s fraudulent acts are thus abhorrent and far-reaching.”