Since the fall of South African apartheid, truth and reconciliation commissions have helped nations around the world confront legacies of oppression. International justice experts say their foothold in the United States is growing.

UNITED NATIONS (CN) — Before helping prosecute war criminals in Yugoslavia, Cambodia and Lebanon, David Tolbert saw the face of oppression up close as a boy in the American South.

“I’m quite aware of the deep burden of Southern history,” said Tolbert, president of the International Center for Transitional Justice, in an interview. “I started my life in segregated schools. This is a very real issue to me.”

Born in South Carolina, Tolbert credits his Republican family’s centuries-long opposition to slavery and segregation as having inspired his work today.

The New York-based human rights organization that he now leads was founded by Alex Boraine, who worked under Desmond Tutu as vice-chair of what was the world’s first Truth and Reconciliation Commission.

“So we have a lot of roots in South Africa, but we draw up on a whole variety of experiences,” Tolbert said. “There have been well over 40 countries that have had transitions across the world in a whole variety of different contexts. And what we try to do is pull from those contexts, those experiences, and try to share that with civil society and governments that are open.”

Not long after South Africa’s commission formed in 1995, other nations such as Congo, Colombia, Chile, Canada, Panama and Sierra Leone used its model to confront their own histories of oppression, genocide and ethnic cleansing.

“It’s not a simple one-size-fits-all, or one-kind-of-approach-fits-all,” Tolbert said.

In the wake of white-supremacist violence this month in Charlottesville, Virginia, many commentators have called for a similar vehicle to redress the legacies of slavery and Jim Crow segregation in the United States.

Where Tolbert and other international justice experts see promise is in local communities and civil society groups. 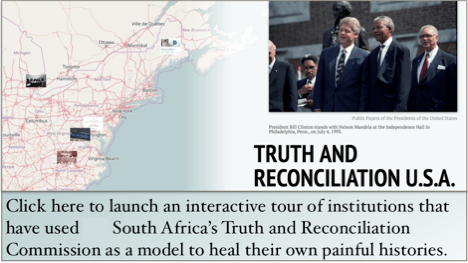 Foothold in the Right

In the U.S. popular imagination, the South African model is the idealistic chatter of the political left, disconnected from the realities on the ground or in Washington.

So it may surprise many to learn that Maine’s Tea Party Gov. Paul LePage convened his own truth and reconciliation commission to redress the forced removal of Native American children from their homes.

“I am happy we are able to take this next step to continue this important effort,” LePage announced back in 2012. “I see this commission as a critical step to improve relations between the state and the tribes.”

The Trump-supporting LePage is as right-leaning as they come, once quoted as smearing the last president in a statement “Obama Hates White People.”

Standing next to five Wabanaki chiefs in 2012, however, the governor signed a mandate to study and atone for the actions of Maine’s child-welfare services.

Three years later, LePage’s commission quoted a former caseworker with the state’s Department of Health and Human Services as describing its actions as a “genocide.”

“We realize that these are forceful words and that they may land in readers’ hearts and minds as blame,” the 90-page report states. “It is hard to fathom for many in Maine that genocide occurred here, much less that it continues to occur in a cultural form.”

Just north of Maine, a truth commission in Canada used similar language to describe its government’s mistreatment of aboriginal children in the country’s residential schools for more than a century.

South Africa’s model took hold in another red state for the 20th anniversary of the Greensboro massacre.

Assembled largely by private parties, the Greensboro Truth and Reconciliation Commission focused on the Nov. 3, 1979, killing of five protesters at a “Death to the Klan” rally hosted by the Communist Workers Party.

An all-white jury ultimately acquitted the KKK and American Nazi Party members charged with the murders, but victims obtained some measure of justice with a $350,000 civil judgment.

“Despite the inflammatory language and the ideological identification with violent international figures, the Communist Party within the United States does not have a historical pattern of terrorist acts,” a 54-page executive summary of the report states. A footnote calls out the Weather Underground as a lone exception.

“Whatʼs more, communism has never been the dominant ideology in any part of the United States, nor has it ever enjoyed the support, direct or indirect, of law enforcement authorities,” the summary continues. “The same cannot be said of the Klan. Founded specifically as an insurrectionist terrorist organization, the Klan has counted among its members many elected and law enforcement officials, including at least one U.S. president.”

Tolbert, the transitional justice expert, said that the Greensboro Commission remains “very contested,” though the Maine one was “more impactful.”

Well before white supremacists held a torchlight rally in Charlottesville, Ali Moussa Iye worked with the Thomas Jefferson Foundation there on shaping some of the country’s most visible monuments to its complicated history: the Founding Father’s Monticello home and the grounds of Colonial Williamsburg.

“We consider that a country cannot really achieve reconciliation and social inclusion if this question is not really discussed, and if a common ground cannot be found between the protagonists of this painful history,” Iye, who leads UNESCO’s Slave Route Project, said in a video interview.

On the grounds, a grave-like plaque of black stone commemorates “The Monticello Labor Force.”

“The operation of Monticello depended primarily on the labor of black slaves,” it begins. “In 1796, there were 110 African-Americans living on the 5,000-acre plantation, almost half of them children.”

The final lines cast a grim — and accurate — judgment of hypocrisy upon the plantation’s venerated owner.

“Jefferson, who considered slavery an ‘abominable crime’ acquired most of his slaves by inheritance,” it states. “He freed only two in his lifetime and five in his will. The others were sold after his death to help pay the debts of his estate.”

As the world marked the International Day for the Remembrance of Slavery and Its Abolition on Wednesday, Iye spoke about his organization’s mission and work from the organization’s headquarters in Paris.

With an eye toward the next generation, Iye noted that UNESCO is holding an international seminar in March 2018 on “new approaches to representing and interpreting slavery in museums and sites.”

“The idea was to bring across the world people who are keeping museums or managing sites of memory and share their experiences,” he said.

Fittingly, the University of Virginia and the National Museum of African-American History and Culture will be participating in next year’s seminar.

Many of America’s top universities owe their wealth and power to the exploitation of slaves, and only recently have dozens of them taken steps to come to terms with it.

Georgetown University, one of the first in this effort, came clean about this history in a September 2016 report by its Working Group on Slavery, Memory, and Reconciliation, modeled on the truth commission in South Africa.

In 1838, the school’s Jesuit leadership sold 272 slaves to finance the university but last year’s groundbreaking report emphasizes that the institution’s sins ran deeper.

“It was not the only, the first, or the last sale of slaves to provide operating revenue for the school, but it was the largest,” the 104-page report states. “This mass sale was the product of a complicated calculus on the part of the Jesuit leadership and an extensive controversy within the order.”

Georgetown University President John J. DeGioia met with the descendants of those slaves last year in New Orleans, Baton Rouge and Maringouin, Louisiana, as well as in Spokane, Washington.

“Over the course of the past two years, we have met together as a university community to intentionally reflect on the significance of a distinctly American challenge — the enduring presence of racial injustice tied to the institution of slavery in the founding of our country as well as Georgetown’s participation in that disgrace,” DeGioia said in a speech announcing the report’s release.

The working group offered diverse recommendations on reconciliation, such as rebranding buildings named after slave owners and offering full-ride scholarships to descendants of slaves as reparations.

Having met with Georgetown’s leaders, UNESCO’s Iye said that the university’s example is spreading throughout the academic community.

“Now, I understand that the University of Virginia is engaged in this, and I think there is more than 22 big American universities, which created a consortium to reflect on that and think of what kind of action can be that,” he said.

Harvard University is one of the institutions on that list.

“In fact, we are working with American institutions — not yet, perhaps, municipalities,” he said. “Not yet, people who are the decision makers at the local level, but of course, that is for us the real people who should bring the change.”

The invitation stands. “Of course, we want to work with them,” Iye said, “and to see how we can also share some of the experiences that we gain from other countries.”

The United Nations released what became a blueprint for truth and reconciliation processes in a 2004 paper by Secretary-General Kofi Annan.

Such concepts helped shape the idea of transitional justice that is the namesake of Tolbert’s organization, but he stressed that no two commissions are alike.

“So we would probably push back against the idea that at least in general, that you would have one mechanism and one approach — and it would depend very much on the context,” Tolbert said. “What you would do in Syria is radically different than what you might do in Colombia or Tunisia.”

For such an effort in the United States, the government already has history from which to draw, if the political will were available.

President Lyndon B. Johnson convened the Kerner Commission the year of the 1967 rebellion in Detroit, and the police brutality and killings that followed it — now the subject of director Katherine Bigelow’s Hollywood blockbuster named after the city.

On the heels of similar riots in Los Angeles, Chicago, Newark and other cities, Johnson said his commission sought to answer three questions: "What happened? Why did it happen? What can be done to prevent it from happening again and again?"

Ultimately, however, the government never acted upon its recommendations.

“It was a presidential commission looking at violence based on race in the U.S., made some very solid recommendations and then kind of sat on the shelf,” Tolbert said.

Looking at the push to revisit these issues after the violence in Charlottesville, Tolbert said a grassroots movement could be fruitful.

“I think the first step is to very carefully understand the context of what has happened, the history, and connect very deeply with civil society,” he said.

UNESCO’s Iye noted that it was U.S. scholars who took the helm when it came to researching truth-telling on slavery.

“The first collaborators partners of the Slavery Project were American scholars and specialists,” he said. “You began before any other country, before Brazil, before Jamaica, before Venezuela, before Colombia. You were doing the work of telling this history.”

U.S. scholars continue to do this work to research the upcoming ninth volume of UNESCO’s “General History of Africa.”

“This is very important: Those claiming white supremacy and purity, and we are showing that nothing is pure,” he said. “Everything is a construction. Any culture is already the result of a mixture, and it’s only because we bring people from different areas, bring together what they do best that they advance.”

Born in Djibouti, Iye is a former journalist with a doctorate in political science. His work in international relations has taken him to Ethiopia, Somalia, Sudan and now France. Just as knowledge benefits from cultural exchange, Iye noted that the converse is also true.

“Each time a country or a nation or a community wants to reduce the plurality of the creation to one of its aspects, to reduce a plural identity to the color or the religion, it is the beginning of a tragedy,” he said.