Coal use has declined dramatically in industrialized nations as renewable energy projects gain popularity, but a spike in natural gas and oil use has sparked a surge in global carbon dioxide emissions that hit a record in 2019 and will likely to continue increasing, according to studies released Tuesday.

(CN) – Coal use has declined dramatically in industrialized nations as renewable energy projects gain popularity, but a spike in natural gas and oil use has sparked a surge in global carbon dioxide emissions that hit a record in 2019 and will likely to continue increasing, according to studies released Tuesday. 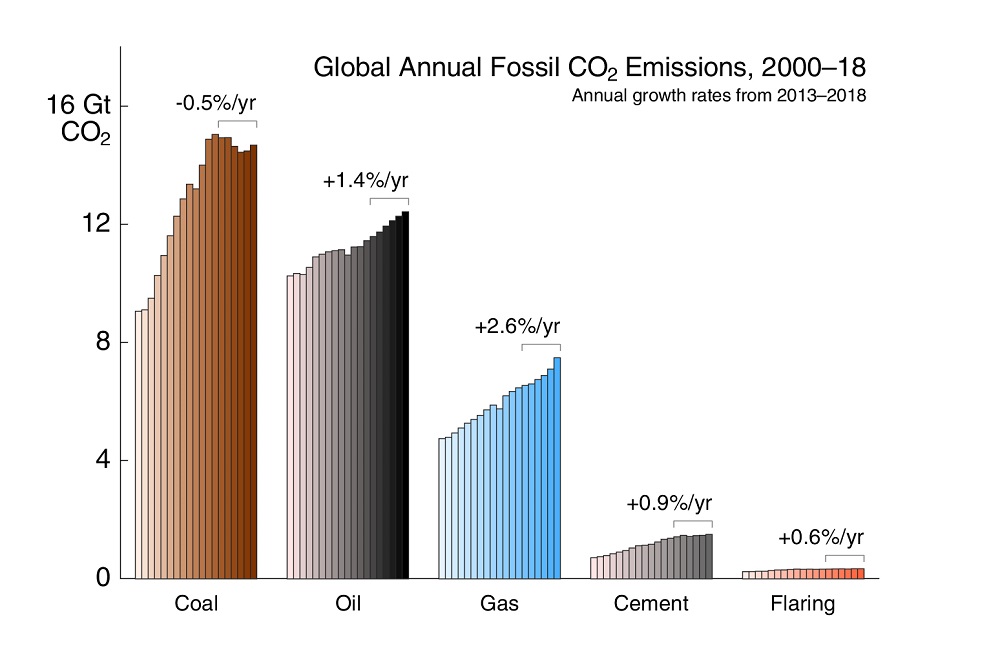 High levels of carbon dioxide in Earth’s atmosphere has been identified by scientists as a primary contributor to global warming.

Stanford University researchers set out to understand why carbon emissions have only slowed in recent years despite a decrease in global coal use and the rise of renewable energy projects worldwide.

In the U.S., annual emissions are down 1.7% from last year but are increasing overall in industrialized nations. China saw its emissions rise 2.7% this year.

The trends threaten to erase the gains made by signatories of the historic 2015 Paris climate agreement, a legally-binding emission-reduction plan from which the Trump administration has formally withdrawn.

Rob Jackson, who leads Stanford University’s Global Carbon Project, said in a statement that a decrease in the rate of growth of emissions is nothing to celebrate.

"When the good news is that emissions growth is slower than last year, we need help," said Jackson, who teaches Earth science systems at Stanford. “When will emissions start to drop?"

Research shows that global fossil-fuel carbon dioxide emissions will break yet another record in 2020, reaching an output of 37 billion tons of CO2, according to a trio of papers published in Earth System Science Data, Environmental Research Letters, and Nature Climate Change, respectively.

About 40% of emissions were tied to coal use while 34% came from oil, the studies found.

Natural gas – which has a lower carbon dioxide output than oil and coal – and cement production accounted for 20% and 6% of emissions, respectively.

The surge in exports of cheap, liquefied natural gas has led to widespread use of the fuel in Asia’s growing consumer markets, researchers found, while per capita consumption of oil in the U.S. and Europe remain 5 to 20 times higher than in China and India.

Vehicle ownership rates in the U.S. stand at nearly one car per resident. But vehicle ownership in Asia, coupled with increased air travel on the continent, are projected to increase CO2 output in decades to come, the studies found.

Wealthier nations are being called on to do their part. While the average person is responsible for 4.8 tons of annual carbon dioxide emissions, Americans are responsible for 3 ½ times that amount.

"Emissions cuts in wealthier nations must outpace increases in poorer countries where access to energy is still needed," Pierre Friedlingstein, researcher at the University of Exeter and lead author of the Earth System Science Data study, said in a statement.

The findings come as international negotiators are meeting in Madrid for the 25th conference of the United Nations Framework Convention on Climate Change.

With projections showing an increase of emissions through 2030, the studies called for revamped global energy policies and fossil-fuel industry reforms in order to counterbalance increased emissions.

"We need every arrow in our climate quiver," Jackson said. "That means stricter fuel efficiency standards, stronger policy incentives for renewables, even dietary changes and carbon capture and storage technologies."

There are signs of hope. Eighteen countries including the United Kingdom and Denmark have found ways to expand their economies without increasing carbon emissions, researchers found.

As renewable energy methods gain traction and energy transmission becomes more efficient, consumption of coal has dropped 11% this year in the U.S., down 50% from peak usage in 2005.

"Declining coal use in the U.S. and Europe is reducing emissions, creating jobs and saving lives through cleaner air," said Jackson.  "More consumers are demanding cheaper alternatives such as solar and wind power."