Apparently, some of you need more to do. Life is way too easy. I know this — or at least I think I do — because a Columbia law professor has written a New York Times op-ed column complaining at length about convenience. The article was so long that I felt inconvenienced.

Apparently, some of you need more to do. Life is way too easy. I know this — or at least I think I do — because a Columbia law professor has written a New York Times op-ed column complaining at length about convenience. The article was so long that I felt inconvenienced.

Actually, it wasn’t all that long — my problem was that I was so astonished by the argument that reading it felt inconvenient. Maybe law professors have too much convenience and are forced to fill their time writing blogs and op-ed pieces. Most of the rest of us still work. A few of us even work hard.

The law prof, however, claimed that convenience “threatens to erase the sort of struggles and challenges that help give meaning to life” and that having lots of choices — in music, entertainment, socks, etc. — “can be surprisingly homogenizing.”

So, apparently, he thinks we were more diverse when there were three television networks and everybody watched the same things.

Consider the convenience of cars — and the inconvenience of traffic jams. There’s a lot of meaning of life being discovered on freeways.

I admit I’m at a loss to explain what this guy was recommending — maybe go to the gym more. What really surprised me, though, were the comments — 504 of them when I looked at the page a while ago. A whole lot of people seemed to agree that life is way too easy. Of course, those are people with the leisure time to read N.Y. Times op-ed pieces.

I’m assuming most of the commenters immediately got up from their computers and ran outside to start digging ditches.

Since the article was written by a law professor, I’m guessing he’d tell his students and lawyers to give up their computers and head to the law library to build character. You run up your billable hours and your clients get to improve their characters too. Inconvenience can be practical.

Of course, the obvious convenience that a lot of us could do without is Twitter. (Note to my Twitter followers: I’m just kidding. Play along.) This may be the view of an alleged Tennessee college professor who, according to news reports last week, issued a challenge to his students to come up with a tweet that would get the professor blocked by President Trump without using profanity or threats.

I say alleged professor because none of the news stories identified the guy. The only reason we know about this is because a student sent out a tweet claiming a professor was offering extra credit for this. For all we know, this tweeter may be working on a project showing how gullible we media types are.

But let’s assume this really happened. Why has this happened? What’s the point and is it even possible?

The first thing I want to know is, what subject does this guy teach? In what field is it useful to develop the skill of annoying someone so much that he never wants to hear from you again? Military strategy, perhaps? 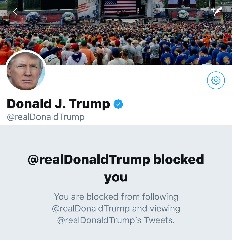 The only other possible answer is statistics. How do you make an impact when you’re in a crowd of 48.1 million — the number of Trump’s followers as of this writing? Are the president and/or his social media advisers, if he has them, paying attention to tweets from Tennessee college professors?

We do know that the president has blocked some famous people — mainly because those famous people have told us about it. The more interesting assignment for research may be how famous do you have to be to be blocked.

But for a student project, what the professor, if he or she was serious, should have asked for was a student successfully getting the president to follow him or her. He only follows 45 people as I write this, so it’s possible.

If you can claim to be a Trump hotel or a golf course, you’ve got a shot.